Negative Press Always Has to Find an Issue 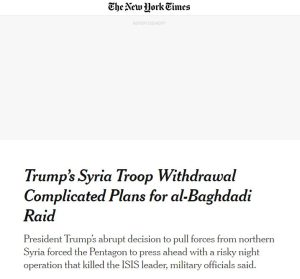 It is really interesting how the press is so biased, that no matter the issue, they MUST simply spin it against Trump. It is really getting so bad these days that the press has surrendered all impartiality and trustworthiness. They were criticizing Trump for pulling out troops from Syria saying ISIS would be given free rein. They failed to understand that all along they were targeting the head of ISIS and intended to take him out. When that takes place, the credit belongs to the military in spite of Trump. It is just interesting how skewed the press has become and they no longer report news, it is all manufacturing news.

When we were opening our first office in Europe back in 1985, I went to lunch with one of the heads of the top Swiss banks and asked him what name should we use since I believed there was an anti-American base in Europe. He asked me to name one European analyst. I was embarrassed because I could not. He said there was none. He explained that if he was British, it was always God save the Queen, French bullish the franc, etc. He said the reason everyone used our services is that “you do not give a shit if the dollar goes up or down.” It was our unbiased analysis that made our operation the largest international FOREX adviser.

This pervasive hatred of Trump so that they must interpret every piece of news against him is diminishing the very institution of the press. The days of true investigative journalists like Edward Murrow are long gone. Journalism is now all about expressing personal doctrines. It has lost the integrity of just reporting the facts as they exist.

They have to stage everything to pretend it is far worse than what it is or to push their own agenda. This has become criminal in any other field. If a brokerage house puts out fake analysis to just sell a product, they paid tremendous fines – it’s illegal. In the world of finance, if you have a conflict of interest in your analysis, it is subject to a fine. Journalism is so corrupt that they can be paid off by political parties and it is perfectly OK to put out propaganda that in any other field would be prison time. Trump should clean up the fake news using the very same theories that land every other field in prison.

Journalism is NOT abusing your position to indoctrinate others to agree with you. It must be just the facts. In real analysis, we have to call both the ups and downs. You cannot simply say a given market will always go up. That is not an analysis.