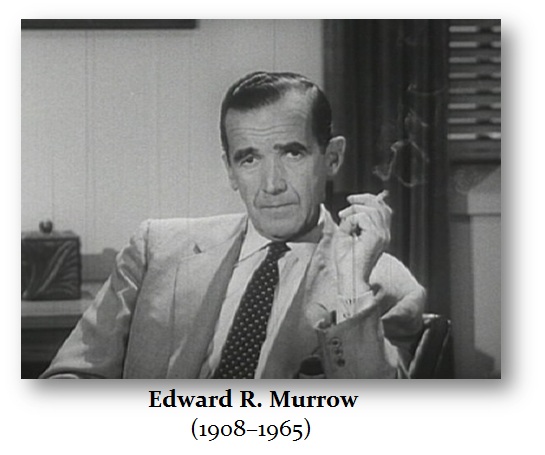 ABC News has indeed violated the principles of a Free Press and is the example why the old Fairness Doctrine should be restored. ABC News has come out and wrote: “Every American president has sparred with the press and fought back against stories unflattering or unfair. But no sitting president has in decades suggested media organizations should be shut down or that the federal government should consider curtailing their content or reach.”

The press thinks it is their right to push their agenda on the people. They no longer report the news, but twist it for their agenda be it left or right. It was back in a 1958 speech to the Radio and Television News Directors Association when veteran CBS journalist Edward R. Murrow told a room full of TV executives: “We are currently wealthy, fat, comfortable and complacent.” Murrow produced a series of reports that helped lead to the censure of Senator Joseph McCarthy and his trumped up witch hunt for communists when it was revealed that he was just making accusations without evidence.

Murrow was one of the journalism’s greatest figures, noting his honesty and integrity in delivering the news. That stature of ethics has been lost which some news organizations like CNN produce fake news not just on Trump, but of everything they touch right down to exaggerating the hurricane in Florida.

Edward Murrow used his position to take on powerful politicians and defend the American people, a free press as envisioned by Thomas Jefferson. He also exposed issues such as segregation and warned that the new TV medium was being used to “distract, delude, amuse and insulate” the public.

The FCC repealed the Fairness Doctrine, which has been rather disastrous. The Fairness Doctrine required that TV and radio stations holding FCC-issued broadcast licenses to (a) devote some of their programmings to controversial issues of public importance, and (b) allow the airing of opposing views on those issues. This meant that programs on politics were required to include opposing opinions on the topic under discussion. Broadcasters had an active duty to determine the spectrum of views on a given issue and include those people best suited to represent those views in their programming. That meant you had to relay both sides of an issue.

Today, mainstream media no longer has to be fair. They can propagate all the propaganda and tell only what the government demands. Hence, nothing that is real is fit for the news if it goes against corporate management or government demands. We are plagued with Terrorism as the excuse to eliminate all privacy as the excuse to raise taxes. This paranoia is not even as honest as McCarthyism which it at least was about Communists. Today, we are subjected to fake news but nobody will defend the people against exaggerated terrorism or the corrupt agenda of false prosecutions for political reasons.

Trump should bring back the Fairness Doctrine. That will apply to both sides.