G20 Blames Your Psychological Problems for their Failure

The G20 central bank and finance ministers met in Shanghai in April and cheered the rally in the markets after patting themselves on the back. They then issued their communication, effectively blaming the private sector for not paying enough taxes for them to squander. They issued their Financial Action Task Force on Money Laundering (FATF), which is really the directive to hunt down money globally for taxes.

The G20 always blames the private sector instead of government. Their working group meeting in Shanghai were absent of any understanding of how the world economy functions or that it was the free flow of money that revived the world economy after World War II. They have not been able to come up with any constructive proposals for reviving the global economy whatsoever. Instead, they complained that the recent market turmoil just doesn’t reflect their view of the “underlying fundamentals of the global economy.”

The price of oil has collapsed some 70% since June 2014, and has hurt emerging markets like Brazil, whose currency plummeted by 50%, and the Russian ruble which is down by 60%. Yet in their own communication, they promote more investment in “green” energy to reduce fossil fuel consumption while embracing the climate change agenda. Of course, they fail to see the conflict there. 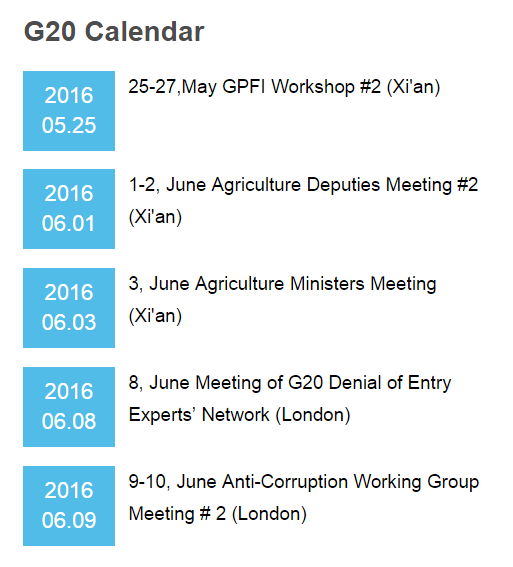 The global economy is moving into another recession. To explain their own failure to ignite the economy, they pinned all the blame on psychological problems of the people. They do not understand that they are too incompetent to generate confidence. Additionally, they employ negative interest rates without realizing that they are wiping out pensions, life insurance companies, and accelerating unfunded pensions in government. Their solution? More taxes. They actually laid it out in the Finance Minister & Central Banker communication (April 14-15 Communiqué_ G20 Finance Ministers and Central Bank Governors Meeting):

The G20 reiterates that it is essential that all countries and jurisdictions fully implement the FATF standards on transparency and beneficial ownership of legal persons and legal arrangements and we express our determination to lead by example in this regard.   We particularly stress the importance of countries and jurisdictions improving the availability of beneficial ownership information to, and its international exchange between, competent authorities for the purposes of tackling tax evasion, terrorist financing and money laundering. We ask the FATF and the Global Forum on Transparency and Exchange of Information for Tax Purposes to make initial proposals by our October meeting on ways to improve the implementation of the international standards on transparency, including on the availability of beneficial ownership information, and its international exchange.”