Are Cryptocurrencies Really a Hedge Against the Dollar? 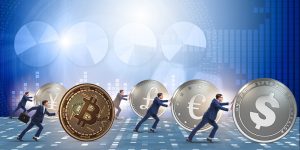 QUESTION: Do you think that cryptocurrencies will be sustainable as governments become pressed for money? What is your view of the dollar? Will it really crash when things are so bad here in Europe?

Thank you in advance

ANSWER: I think it is really naive to believe that cryptocurrencies will survive when we face a sovereign debt crisis, and nobody is interested in buying government debt for the long-haul. Punters believe that rates will go negative, even in Britain, so they are buying bonds at 0.9%, expecting to make a play. Europe, as you know, already ruled that all cryptocurrencies are to be regulated like banks starting January 10, 2020. So there is no hiding money, and by regulating them, these governments can simply seize them at any time and convert them to their own cryptocurrency.

Insofar as China is concerned, cryptocurrencies have not been tolerated by the Chinese government. Initial coin offerings (ICO) were outright banned in China back in September 2017. Many exchange platforms were ordered to be closed. Many exchanges tried to relocate to other jurisdictions. However, China followed the lead from the United States and adopted a long-arm approach to its criminal laws. In other words, organizers and promoters of overseas ICO and exchanges are not free from the jurisdiction of Chinese criminal laws. If the principles are Chinese citizens or if Chinese investors invested in overseas ICO or traded cryptocurrencies on overseas exchanges, they can be subject to criminal laws in China just as Americans are prohibited from investing in offshore funds. It is not outright illegal to hold cryptocurrencies or even to buy or sell them in China. But once again, they must regulate all transactions, which leave them vulnerable to a change in policy.

In the United States, the Treasury classified bitcoin as a convertible decentralized virtual currency in 2013, while the Commodity Futures Trading Commission, CFTC, classified bitcoin as a commodity in September 2015. Under the IRS, bitcoin is taxed as a property. Meanwhile, cryptocurrencies must comply with the registration requirement of the U.S. FinCEN as a money services business and, of course, the anti-money laundering (AML) rules. They must also keep records and make reports to FinCEN.

The idea that cryptocurrencies are somehow outside the central banking system is really an old sales pitch. They are not really a store of wealth, for they too rise and fall in value based upon the current events and global trends. It is no different than anything else trading on exchanges. What has to be realized is that this sales pitch that it is somehow the exception to everything is rather strange. The promotion that it will rise with the decline of the dollar you can say for most other commodities, stocks, and gold. The real question is simply its performance relative to other mediums.

Are cryptocurrencies a better hedge against what is coming? No! There are cycles to everything. You have to look at the potential for each market and look for those that will trend together to determine which will outperform the others like the NASDAQ v Dow & S&P 500.