Wikipedia Co-Founder Urges Public Not to Trust the Website

Wikipedia has become one of the most viewed websites in the world, but can it be trusted as a reliable source? Co-founder Larry Sanger is now warning the public not to trust the website he helped to create. “You can trust it to give an establishment view,” Sanger admitted as he explained that the website’s original design has been destroyed.

Wikipedia was originally created as an open online resource that was committed to neutrality. Between 2004-2009, Sanger said Wikipedia was a pioneer in delivering news from a non-biased perspective but that quickly changed. Users had the ability to edit various pages and debate the information from both sides of the platform, but now it is nearly impossible for the average person to participate. “If you make any edit at all you will be sternly warned or kicked out,” Sanger said, noting this often happens on articles that are “unimportant.”

Sanger believes Wikipedia is completely influenced by the establishment who has turned the site into “a battleground for a version of the truth,” as host Freddie Sayers pointed out. One blatant example is President Joe Biden’s Wikipedia page. Biden’s page has very little criticism or anything “remotely resembling the Republican point of view,” the co-founder commented. Instead, Biden’s Wikipedia page “reads like a defense council’s brief” with no mention of the alternative point of view. In stark contrast, Trump’s page was written from a Democratic point of view and harshly criticizes the former president. In fact, the page accuses Trump of crimes that he has not been charged with committing, such as sparking the January 6 Capitol “siege.” In contrast, Biden’s page fails to mention the Ukraine controversy or any other debacle during his time as vice president or president. Sanger flatly states that Wikipedia is “reliable on the establishment viewpoint,” which is ironic considering its Libertarian co-founders were anti-establishment. 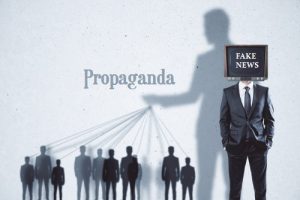 Wikipedia is not a trusted source and has become another tool for government propaganda.