The Reality of Gates’ & Schwab’s Plan

Here is a video of people staving in a food panic in Jos, Nigeria. This is what Big Tech and mainstream media will hide. They cannot be this stupid to impose lockdowns that have reduced the food supply on a massive scale. People are starving in parts of Africa where Gates has been so concerned about reducing the population. This is what the lockdowns have been designed to do. Not just destroy the economy to set it up for Klas Schwab’s New Green Communist World Order,  but this is wiping out the food supply by disrupting the supply chain. To defeat an army you cut off its supply chain. This is PRECISELY what Schwab, Gates, and Soros have done. The world they want to create leaves them as the ruling class while everyone beneath them, the great unwashed, will be EQUAL, owning nothing. 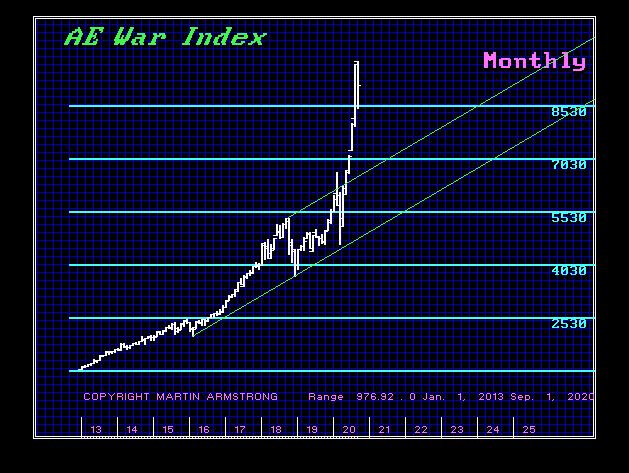 This is our War Index of stocks that will benefit from war. Note that for the past 5 months it has been breaking out. We are also beginning to see breakout is some of our world commodities which are confirming we are also facing shortages that will no doubt lead to famine, death, and starvation. I have seen some wild James Bond films with grand designs to dominate the world. Nobody has ever envisioned using a virus to do what no invading army has ever been able to accomplish. Please stockpile food. Better to be hedged than regret.