Musk Offers to End World Hunger Under One Stipulation 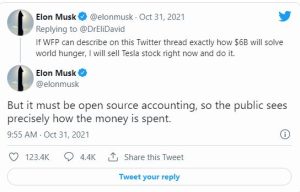 If billionaires paid their fair share, we could allegedly solve world hunger. How?

David Beasley, director of the UN’s World Food Programme (WFP), called out billionaires such as Elon Musk and Jeff Bezos for not donating funds to solve world hunger. “Just $6 billion could keep 42 million people from dying,” Beasley claimed. Musk took to Twitter with a bold offer — he would personally donate $6 billion if the WFP could explain precisely how they would spend the funds. Furthermore, the richest man in the world is asking the WFP to provide a public record of exactly how the money will be spent. 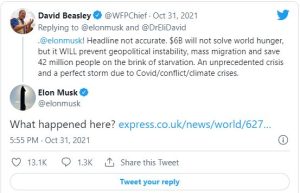 David Beasley replied to Musk, “Headline not accurate. $6B will not solve world hunger, but it WILL prevent geopolitical instability, mass migration and save 42 million people on the brink of starvation. An unprecedented crisis and a perfect storm due to Covid/conflict/climate crises.” In other words, $6 billion will not solve world hunger as the people managing that sum of money could never keep it out of their pockets. Musk replied to Beasley with a link to an ongoing, unpunished, child sex abuse scandal where UN “peacekeepers” abused hungry children. The details are too grotesque to publish here, but make no mistake about it — the UN is not an entity intent on saving the world. They had to turn down a generous donation of $6 billion because they knew that they could never report the paper trail, and the results would likely be a request for more money.

« NIH Begins Damage Control to Cover Fauci’s Lies
Rules for Thee, but Not For Me »