After sending off funds to Ukraine for nine months, people are requesting an itemized bill to find out where billions of taxpayer funds were spent. The newly flipped House called for an audit of Ukrainian funds and a reprioritization to secure America’s own border. Representative Marjorie Taylor Greene (R-GA) accused the Biden Administration of bringing in disabled Ukrainian soldiers as “pawns” when negotiating for additional funds. With the recent FTX blow-up, it is more apparent than ever that these funds to Ukraine have been mishandled. 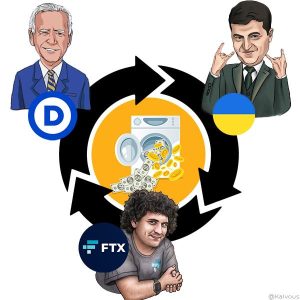 We have sent billions of funds to Ukraine, but nothing has been done to secure the US-Mexico border despite numerous states declaring an invasion and begging Washington for help. “We are completely protecting another country’s border and also waging a proxy war with Russia,” Greene said. “We had five million people cross our border illegally since Joe Biden took office, let’s compare that to how many Russians have invaded Ukraine, 82 thousand Russians have invaded Ukraine,” Greene stated. As I have stated in prior posts, the cost of building a wall was insignificant compared to the cost of housing illegal immigrants.

A deep-dive audit into the handling of Ukrainian funds would lead to Biden’s impeachment, but this could never happen as too many players would crumble. This situation is larger than Biden conjuring up his own money laundering scheme single-handedly, as people on both sides have their hands in the endless war fund pot.