Clash within the Rule of Law 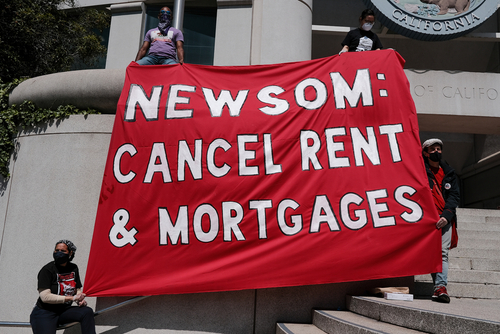 The Department of Justice (DOJ) this past week announced it would appeal a federal judge’s order vacating a nationwide freeze on evictions. The DOJ announcement came just hours after a federal judge in Washington, D.C., struck down the eviction moratorium that was put in place by the Centers for Disease Control and Prevention (CDC) to help those COVID prevented from working yet they had to pay rent. This problem illustrates the real crisis in economics. On the one hand, it certainly is reasonable to say that rents should be suspended if people are prevented from working by the government.

The CDC order declared that “a landlord, owner of a residential property, or other person with a legal right to pursue eviction or possessory action shall not evict any covered person.”Id/55,296

The Court struck it down for a very straightforward reason. “It is the role of the political branches, and not the courts, to assess the merits of policy measures designed to combat the spread of disease, even during a global pandemic. The question for the Court is a narrow one: Does the Public Health Service Act grant the CDC the legal authority to impose a nationwide eviction moratorium? It does not.”

REGARDLESS OF THE MERITS, housing advocates and tenants rights groups may be up in arms, but the decision is correct. The CDC does not have the dictatorial power to make any such decree. If the CDC can impact the economy and suspend contracts under the pretense of a health issue, then this is a very dangerous proposition. That is like saying the Division of Motor Vehicles could claim in the name of safety everyone must be banned from driving to work. Such decrees would be beyond their authority or jurisdiction.

If the goal is that evictions should be banned, then that much come from Congress and not some agency. Additionally, you cannot suspend tenets from paying rent without suspending the landlord’s obligation to pay mortgages and property taxes. You cannot discriminate against one class for the benefit of the other and pretend this is Equal Protection under the Constitution.

The ruling, if it takes effect, would not disturb eviction freezes enacted by state and local governments, only those issued by the CDC, and the DOJ is seriously altering the Constitution to justify such power.

Corporate landlords filed more than 56,000 eviction actions since the eviction pause took effect last September, with almost half of those filed this year, according to a study by the Private Equity Stakeholder Project of seven states. Those notices, which don’t always lead to evictions. Nevertheless, NEVER in 6,000 years of recorded history has any country ever locked down its citizens and denied them the right to earn a living, which then ripples through everything. These absurd orders are unfair and highly disruptive to the economy as a whole.