QUESTION: Mr. Armstrong; I was told that you were indeed the largest forecaster in foreign exchange. The story in London is you advised nearly all the Middle East and were the most important adviser on currency to BCCI, the bank the governments took down back in 1991 along with Salomon Brothers. They made a movie about BCCI. Is it true that you were an adviser to BCCI?

ANSWER: The ’80s were the wild west in finance. I have told the story of how many banks operated back then. I would be called in and told someone wanted to give me $1 billion to manage back then when $1 billion was a lot of money (now it’s trillions). I would go to various banks and there would be a curtain between me and the potential client. I was not allowed to know who they were. I was turning down that business because it was just too wild for me.

Yes, we were advising BCCI on foreign exchange. They were passing it on to specific clients who at the time I did not know. I became concerned when I accepted an account for who I believed was a Saudi individual. The account was opened at Rudolf Wolf in London and after a few months of tracing all the various layers of corporations, it turned out I was managing money for none other than Muammar Mohammed Abu Minyar al-Gaddafi. I closed the account and within a matter of weeks, he was back through a completely different channel. 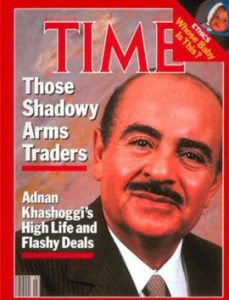 Perhaps one day I will write a book about those days. I ended up managing money for even Mr. Khashoggi who once owned one of the world’s largest yachts, the 86-meter Nabila, which appeared in the James Bond film “Never Say Never Again.” That yacht was later bought by Donald Trump. On top of that, what I thought was a company turned out to be a secret partnership between Gaddafi, Khashoggi, and Ferdinand Marcus of the Philippines. I thought I was dealing with a hotel chain out of Geneva.

The Floating Foreign Exchange Rate system had just begun in 1971. This was not a subject you could go get a degree in. This was a field built from scratch and it took a trader’s understanding of the world economy to cope with the events of the 70s and 80s. I was the leading adviser in FX because there really were no others with any track record. When I say I was called into just about every crisis from 1973 onward, it is not an exaggeration.

I was advising BCCI on currency globally. I was advising a company called GRANEDEX which turned out to be a front for Russia’s KGB. I could never tell who was who. I had even the counter-revolutionary army in Iran coming to me for they were trading to make money to overthrow the religious government in Iran. I would be on a phone call with a client from Saudi Arabia who asked about gold and I said it depended on what OPEC would say that day. He put me on hold and dialed into the OPEC meeting and they put me on speakerphone. Those days taught me about war and how capital flows could be used to forecast war and geopolitical events. It cut my teeth of those wild west days in global finance.

I have handled some of the biggest projects ever and advised globally. To this day, we have people attending the World Economic Conference from 137 different countries. Because the world was such a crazy wild west sort of atmosphere, I turned to be just an institutional adviser of public corporations because I gave up on trying to figure out who the clients really were at times.

It was just impossible. I had the FBI come into the office and asked me where Marcos had hidden the gold of the Philippines. I said I did not know what they were talking about. They responded I was advising a hotel group in Geneva which in which Marcos was a silent partner and I was on the VIP list to his opening of Herald Square in New York City. I simply gave up. I did not know who was who in those days. It was one giant masquerade party.