Is Anything Real in the Biden Administration? 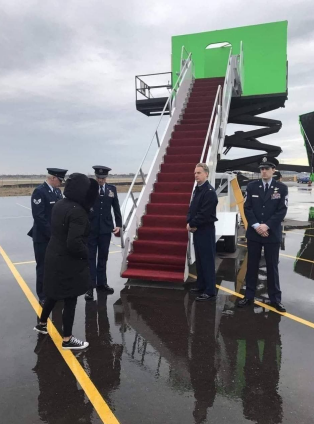 Harris is walking up the steps pretending there is a plane. I have said before, we have no idea who is running the country but I believe the ties go directly to Geneva. We also have no idea of what is real or what is fake anymore and the press is out to overthrow everything we thought was guaranteed. The press and Big Tech have obviously been promised special status in this new world of Authoritarianism emerging from the deliberate destruction of our Democracy. The protests against Georgia are stunning. Objecting to same-day registration and demanding ID to vote is somehow now racist when I cannot get on an airplane without ID or having to take my shoes off.

My family has fought in every war since the American Revolution. Not a single person ever fought for this complete change in the country that the facade of the Biden Administration is projecting. I spoke to the only guy in my neighborhood who had a BIDEN sign out during the election. He voted for Biden simply because he did not like Trump. But he never imagined the changes that Biden is implementing at the direction of undefined bureaucrats who will never be investigated nor will any links to foreign advisers be exposed.

Obviously, we have no idea what is real or what is fake anymore. Note, they also do not have face masks on yet for the film.

« We are in Real Trouble
Bill Gates is Lying for Money »