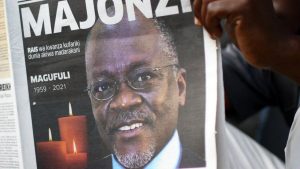 Tanzanian President John Magufuli went missing at the end of February 2021. For 18 days, the president’s whereabouts were unknown until he was pronounced dead on March 17, 2021. Global media headlines of the seemingly healthy 61-year-old’s death marked him a “COVID Denier President,” and his reported cause of death ranged from heart failure to the coronavirus. Before acknowledging his death, Tanzania’s government began to criminally prosecute anyone who claimed the president was ill or missing, with reports of at least two arrests in Kilimanjaro and one in Dar ed Salaam on the basis of spreading dangerous “rumors.”

During his presidency, Magiful did not follow the advice of the Centers for Disease Control (CDC) or the World Health Organization (WHO) by opting not to lockdown his country or implement mandatory mask laws. Tanzania did not experience a rise in cases despite disobeying recommendations. As of May 5, around 16 deaths were attributed to the coronavirus across the nation. “Countries in Africa will be coming here to buy food in the years to come…they will be suffering because of shutting down their economy,” he stated proudly.

“The Ministry of Health should be careful, they should not hurry to try these vaccines without doing research, not every vaccine is important to us, we should be careful. We should not be used as ‘guinea pigs’,” the president stated in January, questioning whether the virus and the vaccine were a Western attempt to depopulate Africa. In fact, Magufuli’s mistrust of the extent of the pandemic and tough stance on longstanding policies earned him the nickname “The Bulldozer” with reasonable cause.

Suspicious of the rising cases of the virus worldwide, Magufuli secretly sent samples from a goat, motor oil, papaya, quail, and jackfruit to be tested for coronavirus under the pretense of the samples coming from people — four of the tests came back positive, while one returned as inconclusive. Magufuli then implemented a ban on coronavirus testing. 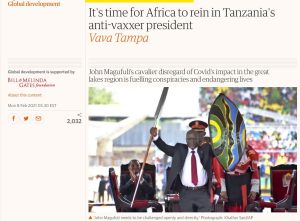 “It’s time for Africa to rein in Tanzania’s anti-vaxxer president,” the headline of the Guardian read on February 8, 2021. The Guardian is sponsored in part by the Bill and Melinda and Gates Foundation, one of the foremost advocates of vaccinations and global lockdowns. “The Tanzanian president seems to be taking populism to a whole new level,” the article claimed. “You really have to wonder, just what is wrong with Magufuli? In his crusade as an anti-vaxxer president, he has gone from repeatedly playing down the virus and mocking World Health Organization guidance to falsely claiming that Tanzania is Covid-free, and now to outrightly attacking his people for being vaccinated, fuelling [sic] denialism and conspiracies,” the article continued, comparing the nation to that of North Korea and alluding to Magufuli winning his election through fraud. The article did not mention his experimental coronavirus testing that judiciously questions the validity of the test.

The president’s last public appearance was a few short weeks later, on February 27, before he vanished. One day before he was declared dead, Aljazeera reported that opposition leaders were demanding answers to his whereabouts. “It is with deep regret that I inform you that today… we lost our brave leader, the president of the Republic of Tanzania, John Pombe Magufuli,” Vice-President Hassan publicly announced the following day. Despite the vice president claiming the cause of death was due to heart failure, countless reports attributed his death to the coronavirus.

The father of five’s legacy was tarnished in the media headlines. His political rival Tundu Lissu called his death “poetic justice.” “This is a president whose denial of COVID-19, whose attempts to cover it up, whose adamant refusal to take any action to combat the pandemic, who has thumbed his nose to the world, refused any international or regional cooperation to deal with COVID-19 and now he goes down with COVID-19 — that is poetic justice to me,” Lissu stated. Otsieno Namwaya, East Africa director at Human Rights Watch, told reporters, “President Magufuli oversaw abusive laws and policies that seriously undermined human rights in Tanzania. The new government now has a chance for a fresh start by ending problematic past practices.”

Less than a month after his death, Bloomberg’s headline read: “Tanzania’s U-Turn on Covid-19 Gets WHO and Africa CDC Support.” The nation is back to business as usual, cooperating with the global agenda to eradicate the coronavirus by any means necessary. No one is lining up to buy food from Tanzania as the late president hoped, and in fact, the CDC is urging people to avoid traveling to the country for any reason.

Still, the question remains: was Magufuli neutralized as he posed a potential threat to the widespread coronavirus agenda? Why was there an eerie sheer of mystery surrounding his whereabouts in the weeks leading up to his death? No one seems to be questioning or investigating the death of the president despite inconsistent reports. How did President John Magufuli die? Worse, should the real question posed to the public be – who killed President John Magufuli, and is there enough concern to launch an investigation?

« Bill Gates’ Health Monopoly Once Again
We are in Real Trouble »