When will Niagara Falls Completely Freeze? 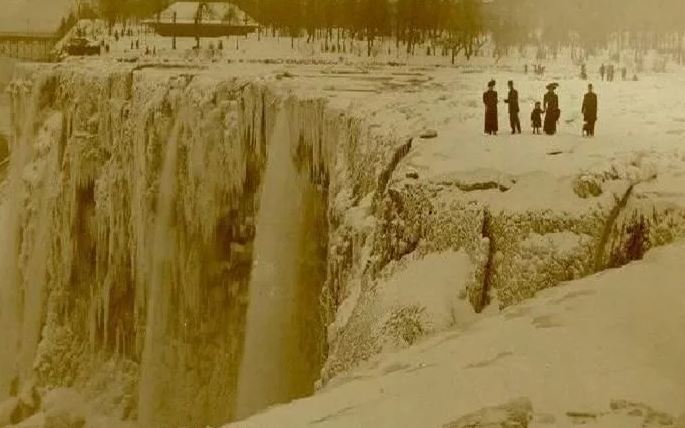 It has been a bitterly cold season. Niagara Falls became a winter wonderland as frigid temperatures cause the falls partially to turn to ice. This is not so rare as people claim. In this 1911 photo of the Great Freeze, you can still see water flowing, but minimal and nowhere near the normal volume flow (hundreds of thousands of gallons per second) that we see in summer. Niagara Falls was a famous tourist spot. I remember as a child my parents traveling there to see the splendor. It use to be a big honeymooners’ destination before air travel. Historically, Niagara Falls does “freeze” but it is extremely rare to “completely” freeze.

The Falls has a lot of ice on them today during this bitterly cold winter. But they have not reached the historic cold period at the beginning of the 20th century. Still, cyclically speaking, it is right on time. The cold we have witnessed so far is ideally going to peak probably around 2023. Perhaps at that point in time, we will see the falls also almost freeze completely. The only recorded incident of the Niagara Falls completely freezing so NO WATER flowed appeared to be 1848. That was the only documented incident on record when Niagara Falls was frozen completely during March of 1848. It was the Buffalo Express Newspaper that reported the shocking complete freeze was caused by ice damming at the mouth of Lake Erie. Our model indicates that if we see a colder temperature BEYOND 2023, then cyclically the peak will unfold in 2037.