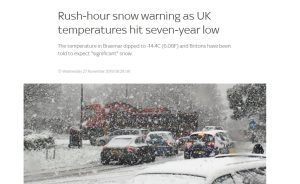 COMMENT: I told a friend to read your blog for a global viewpoint. He said you were wrong that all of Britain was not under snow. I told him he was an idiot. Never is absolutely every part of a country under snow except perhaps Siberia.

REPLY: Yes, the temperature in England fell to a 7-year low, and in Scotland, I think it hit a 10-year low. There is a bad winter storm in the center of the USA. There is no snow in Florida. A story about the cold temperatures in no way means absolutely every spot in a country.

You know what they say about snow. The first snowfall is like seeing an old friend. It is great. But If they stay for weeks, sooner or later you want to throw them out of your house.