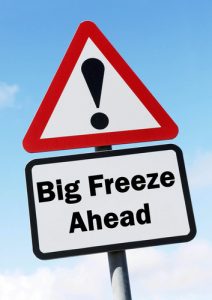 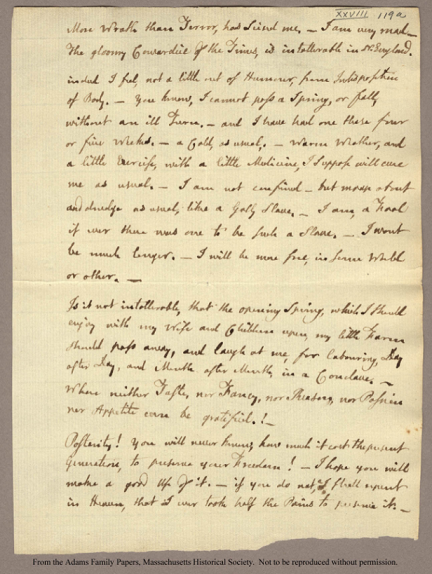 The BIG FREEZE is upon us. The volatility in weather that our computer has been forecasting on a long-term basis should result in this winter being colder than the last. In Britain, the snow has hit an already flood-ravaged country as temperatures plunged to -7C. This is part of the problem we face. The ground freezes down and this prevents winter crops. During the late 1700s, the ground froze to a depth of 2 feet according to John Adams. When John Adams set out to travel to Philadelphia, it was bitterly cold and there was a foot or more of snow that covered the landscape that had blanketed Massachusetts from one end of the province to the other. Beneath the snow, after weeks of severe cold, the ground was frozen solid to a depth of two feet. Packed ice in the road made the journey very hazardous. In a letter to his wife, John Adams wrote:

“Indeed I feel not a little out of Humour, from Indisposition of Body. You know, I cannot pass a Spring, or fall, without an ill Turn — and I have had one these four or five Weeks — a Cold, as usual. Warm Weather, and a little Exercise, with a little Medicine, I suppose will cure me as usual. … Posterity! You will never know, how much it cost the present Generation, to preserve your Freedom! I hope you will make a good Use of it. If you do not, I shall repent in Heaven, that I ever took half the Pains to preserve it.”

On September 8, 1816, Jefferson described the weather in a letter to Albert Gallatin:

“We have had the most extraordinary year of drought and cold ever known in the history of America. In June, instead of 3¾ inches, our average of rain for that month, we had only 1/3 of an inch; in August, instead of 9 1/6 inches our average, we had only 8/10 of an inch; and it still continues. The summer too has been as cold as a moderate winter. In every state North of this there has been frost in every month of the year; in this state we had none in June and July but those of August killed much corn over the mountains. The crop of corn through the Atlantic states will probably be less than 1/3 of an ordinary one, that of tobacco still less, and of mean quality.”

It is global cooling, not global warming, that we should fear the most. Climate change people may get their wish to reduce the population. That is usually the result of global cooling, which creates famine as we are witnessing already in North Korea. The past winter 2018/2019 experienced record breaking cold temperatures. We should beat that this winter 2019/2020. This is all part of the next wave in the Economic Confidence Model.