QUESTION: How can you be against climate change when every world leader has been convinced and 97% of all scientists say you are wrong?

ANSWER: Climate always changes and it has done so for millions of years without soccer moms driving the kids in SUVs. It is just propaganda. Governments have adopted this as the excuse to impose political change. The United Nations uses it to further their own position that we need a one-world government to save the planet. They created a clock in New York to say we have only 7 years left before the planet dies. 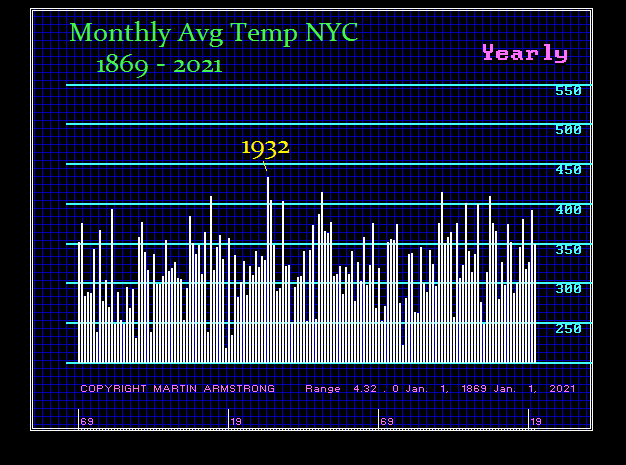 Here is the data from the government itself and it shows no change in the trend whatsoever to support a perilous cliff for us 7 years from now. This is a chart of only January which is one of the coldest months of the year. The highest average remains that of 1932 and the Dust Bowl. There is absolutely no indication of a warming trend whatsoever. It is snowing in Hawaii right now. Temperatures in Siberia have broken all records dropping to minus 140°F where people may just freeze to death. The Northwest Passage was still frozen in August. Even looking at the entire Antarctic continent, this winter of 2021 is already the second-coldest on record as reported by the propaganda network – CNN.

This is not my personal opinion. I am closer to my expiration date than my birth date. I do not even sell advertising on this site because I do not need the money. What I do is for my grandchildren. I really do not care if you believe me or not. That is your problem and if you do not have an inquiring nature, then you have my condolences. You will probably wear a mask by yourself while driving your car. Do you also wear a condom at night when you go to bed alone just in case? 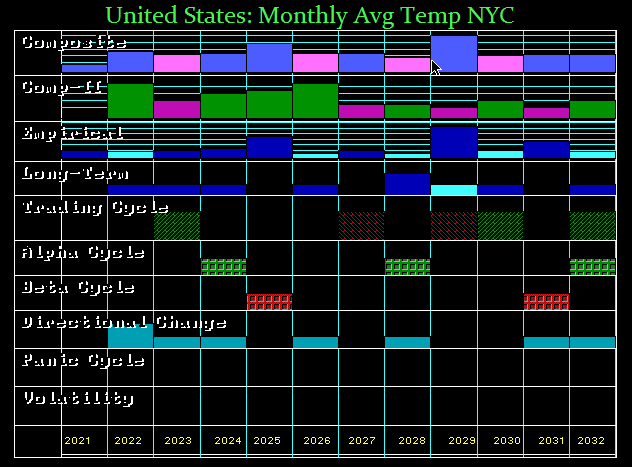 Here is the computer forecast on the weather out to 2032 using the government’s data for NYC. We are staring into the abyss when it comes to weather. If I am right, they are creating a major crisis that will result in a shortage of food because we are turning colder, not warmer. That will introduce a reduction in population but malnutrition is what feeds the rise of disease and historically plagues. That combined with COVID restriction, has already sent inflation dramatically higher. This is only the beginning.

We have a Double Directional Change in 2022 and a string of Directional Changes warning of extreme volatility ahead. We will see the first crisis in 2029, but we are headed into a global cooling that will not bottom until 2044 at best. I will not be here by then. Thank God, for I hate the cold.

The sooner you wake up and realize that those in government have no interest in the planet or you. They only see the world through the eyes of their own power. If you believe them because the majority have been suckered in, it is your future you are rolling the dice on. What will it take for you to ever realize that politicians NEVER tell the truth?