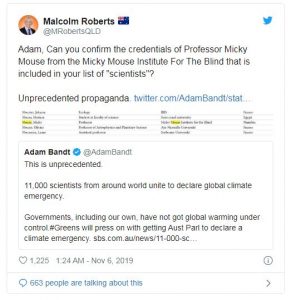 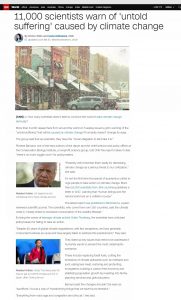 Amazingly, among the list of 11,000 climate experts includes Mickey Mouse from the Mickey Mouse Institute For the Blind. No one in the press bothered to verify such an announcement despite 11,000 scientists claiming to have signed something that no legitimate scientist would EVER ascribe to. This is not science, it is propaganda. What scientist would advocate teaching girls not to have children? This outrageous paper claimed to be supported by 11,000 scientists states:

It is curious that the very same goal of reducing the population began during the environmental movement for wetlands. It is clear that these people believe in reducing the population, but their arguments will impact ONLY the industrial world so the population will continue to grow in Africa, Asia, and South America. The third world sees this as the oppression that they should not now develop. Why don’t they pass a law making it illegal to heat your home or use air conditioning? Would they also be in favor of pulling the plug on hospitals for consuming electricity to save lives they think should be terminated provided it is not theirs?