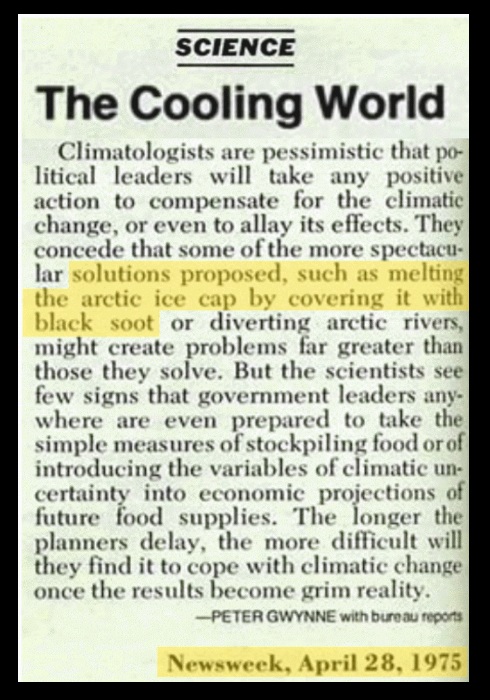 In the April 28, 1975 edition of Newsweek, they actually proposed solutions for climate change that included outlawing internal combustion engines. The interesting aspect was the fear at that time was about global cooling — not global warming. The 70s were dominated by the fear that we were facing manmade global cooling, not warming. TIME magazine’s January 31, 1977 cover featured a story, “How to Survive The Coming Ice Age.” It included “facts” such as scientists predicting that Earth’s so-called average temperature could drop by 20 degrees Fahrenheit due to manmade global cooling. Dr. Murray Mitchell of the National Oceanic and Atmospheric Administration warned readers that “the drop in temperature between 1945 and 1968 had taken us one-sixth of the way to the next Ice Age temperature.”

Global cooling was the big scare as it gained considerable support among me-too scientists as we once again see today with global warming.  However, suddenly as everything is cyclical, instead of cooling as long predicted by manmade climate change advocates, the planet began to warm again. OMG! We were wrong! Something had to be done to rescue the climate change agenda from total disaster and scientists who proved they were not so scientific.

This is when Al Gore came to the rescue. Just like the poles flip on the sun every 11 years, Al Gore flipped the argument from manmade cooling to manmade warming to save the end goal — eliminating all fossil fuels regardless of the evidence. Who needs science when you can just make up the studies and cherry-pick the facts to support whatever you want.

Al Gore Sr. was a very influential and powerful Senator from Tennessee. Even Wikipedia said that Gore was “an avid reader who fell in love with scientific and mathematical theories, but he did not do well in science classes and avoided taking math.” Nevertheless, his father made sure that his son was elected to the House of Representatives, serving from 1977 to 1985, and then going on to the Senate from 1985 to 1993.

Gore’s primary issue became his obsession that the Earth would perish if we did not eliminate fossil fuels. When he advanced to Vice President under President Bill Clinton, Gore was at last able to enact policies and direct funding to ensure that the climate change agenda became a top priority of the United States Government. Gore had the authority now to create the President’s Council on Sustainable Development. Gore immediately changed the Council’s Charter on April 25, 1997, amending the “Scope of Activities” to include advise the President “on domestic implementation of policy options to reduce greenhouse gas emissions.”

It was Al Gore who steered the Council to identify and encourage the reduction in greenhouse gas emissions across diverse sectors and levels of society. This is the man who has convinced others using science he did not understand and avoided in school, yet he is prepared to push his ideas that are no different than some new religion and force everyone to accept his beliefs or go to prison for even refusing to wear a mask. He joined with Greenpeace, which was engaged in violence to push their agenda, and became a board member of the World Economic Forum to steer that organization against all opposition and to support the fall of democracy because we should not have a vote in how our future is to unfold. He disagrees with the American Constitution that we are entitled to freedom of speech, assembly, and the pursuit of our own happiness. Like all leftists, Al Gore will not tolerate dissent. It is always their way or no way which is why Marxism has killed more than all the wars of religion combined.

The Council was charged originally to advise the President “on matters involving sustainable development.” Gore rejected any alternative points of view on the science of climate change. He deliberately excluded all opposition is the tradition of a true leftist. He had made the conclusion that the Clinton administration would go in the direction of global warming reversing the very same argument from the 70s that fossil fuels were causing global cooling. In the cover letter to the President that was accompanying the 1999 report, Advancing Prosperity, Opportunity and a Healthy Environment for the 21st Century, Gore made sure that the Council concluded: “Our report presents consensus recommendations on how America can reduce greenhouse gas emissions and take other steps to protect the climate.” This was AFTER he blocked all opposition. 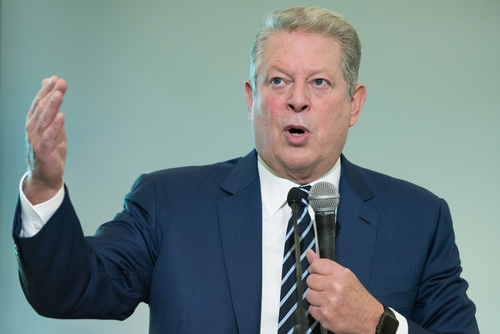 The world had to change and anyone who disagreed with Gore had to be rejected and criticized as fake science. This became Gore’s strategy to take over the world and force the abandonment of fossil fuels. He directed all the agencies which included the Department of Energy, Environmental Protection Agency, National Science Foundation, Department of Education, National Oceanic and Atmospheric Administration, and National Aeronautics and Space Administration, to adopt his agenda. 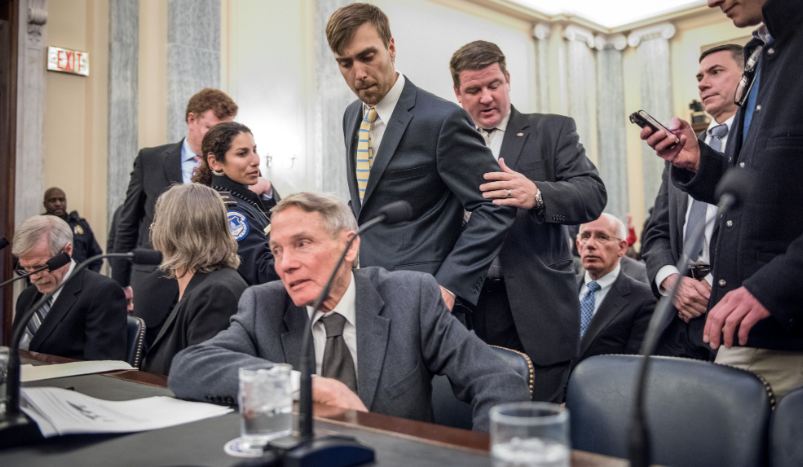 When physicist Dr. William Happer, then Director of Energy Research at the Department of Energy, testified before Congress in 1993 that scientific data did not support the hypothesis of manmade global warming, Gore went nuts. Gore immediately had Happer fired. It was 15 years later when Happer commented: “I had the privilege of being fired by Al Gore since I refused to go along with his alarmism. I did not need the job that badly.” Greenpeace then later tried to slander him saying he was being funded by the energy industry. They always twist the facts and then try to claim if someone is approached for their ideas and asked to do a study it somehow discredits their original conclusions.

Al Gore used his theory to gather a personal fortune that has exceeded $300 million. Gore’s movie, “An Inconvenient Truth,” put forth nothing but propaganda. It was challenged in the courts in London when they were trying to force students to watch it. The court found that Gore’s documentary contains nine key scientific errors. The judge declined to ban the Academy Award-winning film from British schools but ruled that it can ONLY be shown with guidance notes to prevent political indoctrination (see Telegraph 10/11/2007).