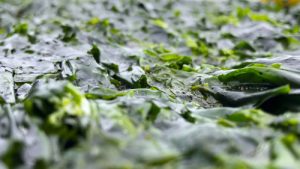 Algae absorbs CO2 and a 500% increase in its population caused a mass extinction that wiped out more than three-quarters of all marine life and turned the planet into a phase of global cooling. Researchers from Harvard University made the discovery while studying ancient ocean sediments unearthed in Nevada. The sample of shale and limestone contained excessive compounds derived from chlorophyll, warning that over a period of just a few million years, the amount of these compounds increased approximately five-fold. They sucked so much CO2 out of the atmosphere that the planet was thrust into a virtual Ice Age. The idea of zero-emissions would create a major shift into global cooling.

Instead of seizing the economy and taxing everyone into non-existence, how about just requiring the construction of algae farms?

« Canada and the Climate Conspiracy?
The Cycle of Climate Fear Tactics »