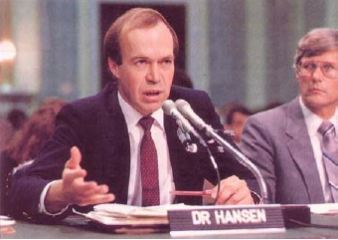 The Wall Street Journal just published a review of the Global Warming Forecasts for the past 30 years. They have not even come close to the scenarios they put forth back in 1988. On June 23, 1988, the then NASA scientist James E. Hansen who helped to start all this nonsense testified before the Senate Committee on Energy and Natural Resources. He stated that he expressed had a “high degree of confidence” in “a cause-and-effect relationship between the claimed CO2 induced “greenhouse effect and observed warming.” That is how government characterizes something when they are guessing – “high degree of confidence” which was the same words used to invade Iraq who had weapons of mass destruction. He later came out and said: “Simply stated, there is no doubt that Saddam Hussein now has weapons of mass destruction.” (August 25, 2002). The CIA Director testified before Congress and said: “We said in the estimate with high confidence that Iraq had them.” see Transcript Washington Post). Why does anyone EVER believe those in government? They cannot even forecast GDP accurately when they fudge the numbers. 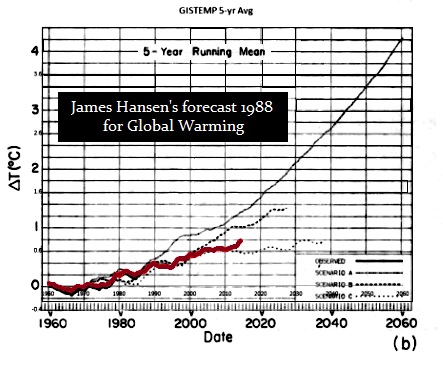 Here is Hansen’s forecast. The dark red overlay is actual surface temperatures reported and there is even a controversy surrounding them that they have been constantly skewed higher to not look like complete idiots.  Even the models devised by the United Nations Intergovernmental Panel on Climate Change, are at least twice the actual temperature by now even with fudged numbers. So why are all these model so exaggerated?

These models are completely VOID of cyclical models and they do not even understand that this is a cycle. They are constructed with same idiotic bases that whatever trend is in motion will remain in motion. The Dow Jones Industrials closed 1932 at 60.26 and 1933 at 98.67. That was a 63.7% gain year over year. By assuming that trend will remain in motion, which was his dire forecast, the Dow would have reach 96,433,885,025.00 by 1975. That makes 50,000 look cheap.

Even averaging a 5-year advance VOID of understanding cycles, fails to provide a valid forecast ever. If I take the closing in the Dow of 2009 and the closing of 2014, the average advance was 1479 points per year. Now take the 2014 closing of 17823.07, that gives me 25,218.09. That is fine because we have been in a bull market. We all know the cycle will change. That is what is wrong with the global warming forecasts.

What actually happened, they got $1 billion for research by scaring the HELL out of everyone. I wonder what kind of chart I should make to get $1 billion handed to me from Congress with no performance requirements. What a deal.

« Climate & Hunt for Taxes
Its Snowing Still now in NewFoundland »