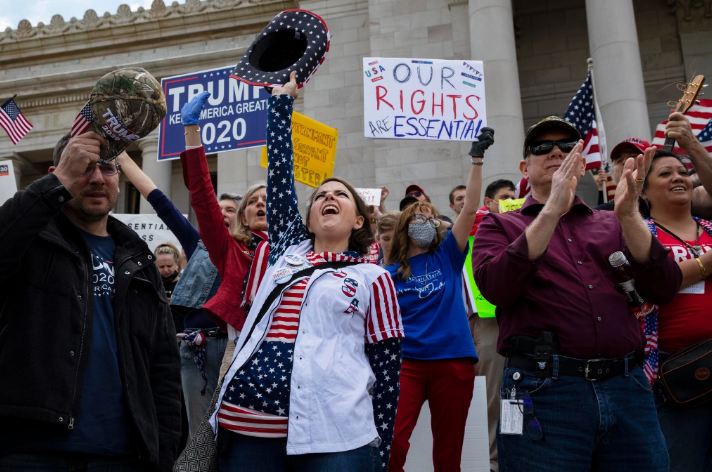 Gates and his puppet the WHO think they can restructure the world by forcing the economy to collapse. They fail to grasp that the civil unrest will rise dramatically after 4 weeks, which are witnessing, and then it will turn violent after 6 weeks. This is simply the cyclical behavior of human nature. Youths clashed with police in suburbs around Paris early on Wednesday. This was the fourth consecutive night of trouble as strict lockdown rules to tackle the coronavirus have heightened social tensions. Protests are starting all around the United States as the youth see this as a human rights issue when there is no serious risk of this coronavirus except to the elderly. Even down in New Zealand, they call this “the old people virus.” The New York Times simply calls them Republicans who are not worth listening to.

So far, the crowds are small and typically the youth. Protests have appeared in San Diego, with protesters marching against the ongoing closure of beaches and parks in the city. Protesters also turned out in state capitols in Texas, Maryland, and Virginia over the weekend. The leftist press pretends this is not real but simply covertly organized by Republicans pretending 100% of the country loves the lockdown. The Washington Post insists this is all funded by Republicans and not truly grass-roots.

Protests will continue to increase the longer this goes on and evolve into civil unrest with violence. Even in Florida, where we are not locked down, resentment is building. Many are voicing discontent and appropriately asking if 1,000 people died of the flu in Tampa, would they close New York City? Everyone knows the answer – NO WAY! This is starting to promote regional conflicts.

« Sex Workers, Homeless & Suicides on the Rise Thanks to COVID-19
Huge Protests in Germany Against Government’s Lockdowns »