Women Rally but for What?

COMMENT: In the UK, the organizers of this woman’s march said it was not a protest about Trump. In the United States it is being billed as a Trump protest. What a difference the other side of the pond.

ANSWER: Yes. Here the press is always going to be negative and will do whatever they can to bash Trump for the next 4 years. This will be in fact the very means of dividing the United States that will lead to massive civil unrest if not an uprising from the left. I cannot believe how ignorant these women are yelling that Trump better keep his hands off of their rights. This is the gender confrontation of the 1960s all over again. The real women activists from the Sixties are all dying alone. Their confrontation with men has been so nasty, who would want to be in such a position. There should be no suppression from either side. A couple is a team effort. Yes, there are men extremely possessive. But there are women who have the same mindset.

Trump has said nothing about subjugating women. I really do not get this. If there was anyone who oppressed women it was Hillary. She trashed any women Bill had an affair with. Bill will be Bill as he was at the inauguration. That was a political marriage all the time. This protest yelling “We’re Not Going Away” is very befuddling. I understand protesting something Trump proposes or does. But what was all of this about – just a protest organized by the left with unknowing participants?

We can see that moving forward the press is intent on tearing the United States apart at the seams by constantly highlighting unrest and groups hate Trump because of the negative campaign Hillary ran. Hillary’s entire life has been a gender war and this march is her drowning glory. This protest is just part of a larger agenda that is turning everyone against everyone else. The New York Times reported that the women are protesting reproductive rights, which only the Supreme Court could possibly overrule and there is no likelihood of that, immigration and civil rights. Where are these only a women’s issue aside from the reproductive rights of abortion? Very strange:

The “march is the start of what organizers hope could be a sustained campaign of protest in a polarized America, unifying demonstrators around issues like reproductive rights, immigration and civil rights.” 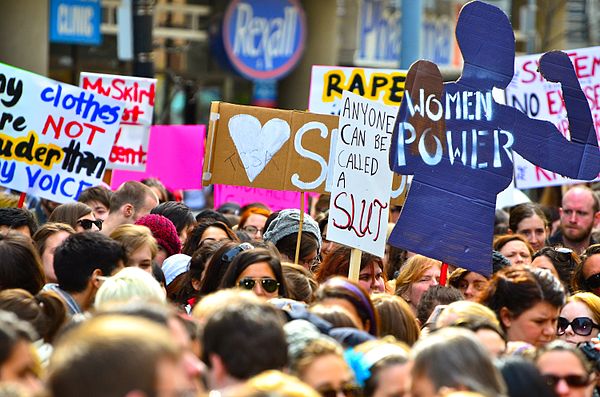 There are the Slutwalks, which are protest taking the form of a march, primarily of  young women, wearing revealing clothes often just underwear or sexy attire and scanty tops dressing like “sluts” to protest rape and how men look at them. I am sure Bill Clinton would love to be a judge for the best dress in those events. At least the Slutwalks are a woman’s issue. I fail to see how immigration and civil rights warrants signs such as “Pussy Power” being paraded around.

So here we have a president who has said NOTHING about reducing rights of CITIZENS. Yet we have people protesting for what? Let terrorists enter the country as what took place in Europe? Just ask for political asylum in Europe. We can organize a collection to buy everyone passage pretty fast.