Once again, the London police continue to support the government and attacked peaceful protestors in Trafalgar Square. No matter what the evidence, the government is maintaining these Draconian lockdowns. We can see that the protest was peaceful until the police showed up to brutally abuse the rights of the people that will suppress their own family’s future.

Unfortunately, the London police are supporting absolute tyranny. This is clearly part of this global agenda to hand sovereignty to the United Nations. It may sound more like a conspiracy theory, but already there is talk in London that they will next use these lockdowns to combat Climate Change. Keeping people from commuting to work to reduce fuel consumption. Mariana Mazzucato, a professor in the Economics of Innovation and Public Value at University College London and also a Founding Director of the UCL Institute for Innovation and Public Purpose. She has bought into the UN agenda and claims that the world is “approaching a tipping point on climate change, when protecting the future of civilization will require dramatic interventions.” 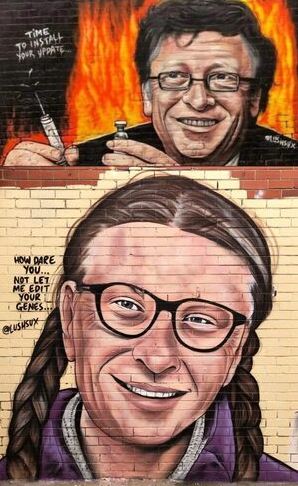 Mazzucato is suggesting that if we do not reduce CO2, then these lockdowns will be justified to save the planet. We are already dealing with a fake pandemic, which is clearly being used to expand the powers of government. They have Europe in their back-pocket, New Zealand, and of course Australia under the insane control of the madman Daniels Andrews. Above, is street art in Melbourne against this orchestrated agenda. What has escaped most of the headline is what is going on in Canada. Prime Minister Justin Trudeau who has suspended Parliament. This battle to overthrow Trump is part of this Globalist Agenda. If they can get rid of Trump, then all that stands in their way is China and Russia. They intend to impose sanctions to try to force them to comply with this UN Agenda.