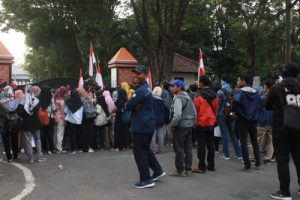 The contagion of discontent exists. I have studied this interesting phenomenon from ancient times to the present. We have witnessed massive rioting in Hong Kong and that does spill over into other societies who then protest similar but local issues. In ancient times, Rome overthrew its Tarquin king and the Republic was born. Within a few months, we see the birth of democracy in Athens after they overthrew their tyrants 509/508 BC.

There was the 1989 Tiananmen Square uprising that began the fall of communism in China. Within a matter of a few months, the Berlin Wall came crashing down. The American Revolution overthrew the monarchy and George Washington was sworn in as the first president in 1789. It was also 1789 when the French Revolution began which also overthrew the monarchy. In 1933, FDR came to power and so did Adolf Hitler.

Here we have the Hong Kong protests which have influenced Indonesia protests. The revisions to the legal code include penalties for sex outside marriage, insulting the president’s dignity, a four-year jail term for abortions in the absence of a medical emergency or rape, and a prison term for black magic.

The government has responded with tear gas and water cannons. Meanwhile, China has increased its troop strength on the border with Hong Kong as tensions continue.