QUESTION: Dear Mr. Armstrong, I am writing from Lithuania, next to Belarus, which is is undergoing some serious civil unrest. It is anyone’s guess whether the presidential election outcome was faked/real, but the fact is that President Lukashenko is under serious pressure aimed at him being ousted. A question arises if the concerted effort to remove him was precipitated by his skeptical attitude towards all things covid19. I have to admit that I am no big fan of any dictator including Lukashenko, but the timing seems odd, as TPTB cannot care less for human rights abuse- Saudi Arabia is ok to them.

MY QUESTION IS IF BILL GATES IS PULLING THE STRINGS, as Lukashenko made a mockery of the corona affair? There were some obviously staged events in Lithuania to support the uprising in Belarus. And what worries me most, is the fact that participants were joining gloved hands and had masks on, sort of voluntary slaves. Ironically, the Belarus dictator let his people live their normal lives, including football games, when my Lithuania was under lockdown, and my 9 yo daughter has some anxiety issues since. Sort of Stockholm syndrome.

Keep up your great work.

ANSWER: President Lukashenko is often called the accidental last dictator of Europe. There is no question that the Belarusian government has been against the climate change movement. Only in January 2020 did it announce an action plan to phase out polymer packaging. However, Lukashenko also rejected COVID-19 and did not lockdown his economy. 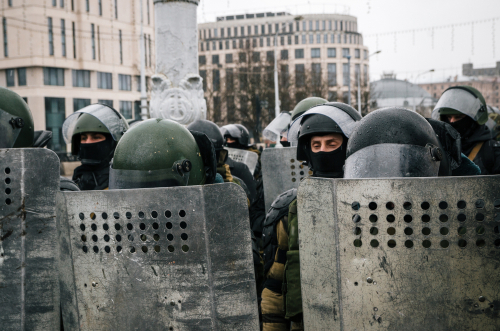 The rumor is that the opposition is being funded by Soros. Lukashenko accused the West of fomenting unrest as he sought to consolidate his grip on power amid widening protests. But it may not be governments, but clandestine activists on a global scale. Lukashenko spoke as the European Union rejected the official results of the vote. The EU naturally expressed its solidarity with protesters. The EU said it’s preparing sanctions against Belarusian officials responsible for the brutal post-election police actions. Lukashenko is also keeping in close contact with Putin in Russia.

« Thousands Protest Lockdowns in Ireland
What Kind of Civil Unrest Are We Looking At? »