Mario Draghi said the euro-area economy is strong enough to overcome increased risk,  and therefore this justifies the European Central Bank’s decision to end bond purchases bringing to an end a decade-long failed experiment. The truth behind this statement is starkly different than being portrayed in the press. Draghi also pledged to keep interest rates unchanged at current record lows until his personal term is finished next year. There is the contradiction for if the ECB stops buying debt, who will do so at artificially low rates of interest?

Draghi knows full well that he has utterly destroyed the bond markets in Europe. The ECB has also made it clear that they will REINVEST when the bonds previously purchased mature. The Federal Reserve has taken the opposite position and will NOT reinvest allowing their balance sheet to shrink.

If the economy is that strong, then why not end the QE right now? The fallacy here is that this has nothing to do with the economy. The ECB has simply had the member states on life-support. Interest rates will soar in Europe on long-term debt or there will be no buyers. Pension funds cannot buy 10-year bonds at even 3% when they need 8% to cover liabilities.

The statement by Draghi is creating a total paradox. You cannot keep short-term interest rates where they are and charge negative rates for deposits and simultaneously end QE and expect to sell bonds to the public at insanely low levels.

The press interprets this as the ECB with ending QE because they are “betting that the euro-area economy is robust enough to ride out an apparent slowdown amid risks including U.S. trade tariffs and nervousness that Italy’s populist government will spark another financial crisis” reported Bloomberg. What is seriously omitted here is that the member states will be UNABLE to sell long-term debt at these low levels to the private sector and the free market will send rates higher. This means that the states will have to then raise taxes to stay within the EU criteria and that will further suppress the European economy. 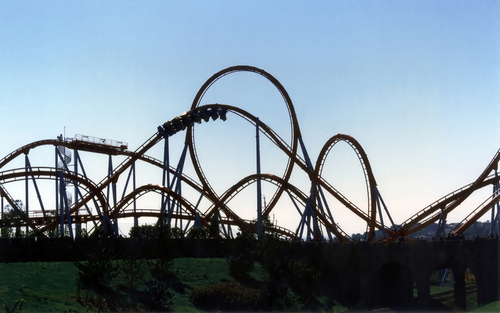 We are simply at the end of the road of this complete insanity. So buckle up. Get ready for the ride of a lifetime and make sure you keep your hands and feet safely inside the vehicle. Is the ECB risking a total collapse in public confidence when they discover you cannot keep rates artificially low and end QE simultaneously?

« Ancient Bankers Testing Methods for Counterfeits
Are Central Bankers Directing the Flow of Money without any Checks or Balances? »