Can the Fed really Control the Economy?

QUESTION: This whirligig talk of whether the Fed cuts rates by 25 or 50 basis points is carnival-level absurdity. Does the Fed have the “pretense of knowledge,” as F.A. Hayek, said, that they can regulate the economy like turning up or down the thermostat? I know you don’t agree with this, Martin, but then, Wall St. trades on daily sentiment not ideology.

ANSWER: I understand the theory, but where it is seriously flawed is the idea that people will borrow simply because you lower rates. More than 10 years of Quantitative Easing, which has failed, answers that question. The way the Fed was originally designed allowed it to stimulate the economy by purchasing corporate paper directly, which placed it in a better management position. Buying only government paper from banks who in turn hoard the money fails. As Larry Summers admitted, they have NEVER been able to predict a recession even once. 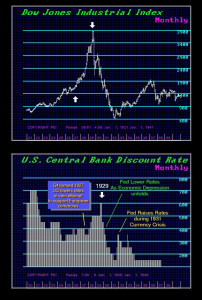 The Fed lowered rates during every recession to no avail just as the ECB has moved to negative rates without success. The central banks are trapped and they are quietly asking for help from the politicians which will never happen.

« Did the Fed Begin Secret Bailouts in 2007 Before Anyone Knew of the Pending Crisis?
Can the US Government Really Force the Dollar Lower? »