What People Do Not Understand About Cryptocurrency

There seems to be a HUGE gap in what people think about cryptocurrency. The European Central Bank (ECB) is working on a scheme to launch “digital euro central bank money” as soon as possible. Many economists praise the project as an “innovation,” as an important and indispensable step in an increasingly digitized world. But economists typically always advocate socialism without ever actually contemplating what is its final destination. The socialist press which has engulfed most of the mainstream is also obvious to what is the final destination.

The ECB has made its intentions known, as has the Federal Reserve, that in declaring a digital currency, both have stated it will be a currency accessible for everyone, robust, secure, efficient, and compliant with the new agenda. What is overlooked is this is to be a central bank currency and they have been quietly suggesting that they will even take direct depositions from non-banks. Nobody seems to really understand what that means. As usual, they simply glass over the statements. In truth, it is circumventing the banking system for they are also not about to bail out the banks in this new world because they are also contemplating the end of government debt. If the government does not borrow, then who needs the bakers?

Mainstream media also refuses to address privacy concerns. To be very clear, the path to digital currency is also one to total surveillance by a state regime that will accelerate considerably in this world where they can pick your face out of a crowd of a thousand.

Anyone who thinks a digital euro is somehow better because it is not fiat money, well it is simply fiat money on steroids. The ECB will not surrender its monopoly of euro production. However, what is being talked about behind the curtain is that a digital euro can either be “account-based” meaning you will keep it in an account held with the ECB directly, or it can be “token-based” where banks receive a “token” that can be transferred from smartphone to smartphone via an app.

The ECB says the digital euro is a “compliment” to cash and bank balances. Clearly, that is like saying the lockdown will be just three weeks when they never had any such intention. Obviously, those who pay in cash find it convenient and want to ensure their anonymity. That will become a thing of the past which is their intention. The objective is to force everyone into paying electronically, i.e., transfer balances through PayPal, Apple Pay, or debit or credit cards. 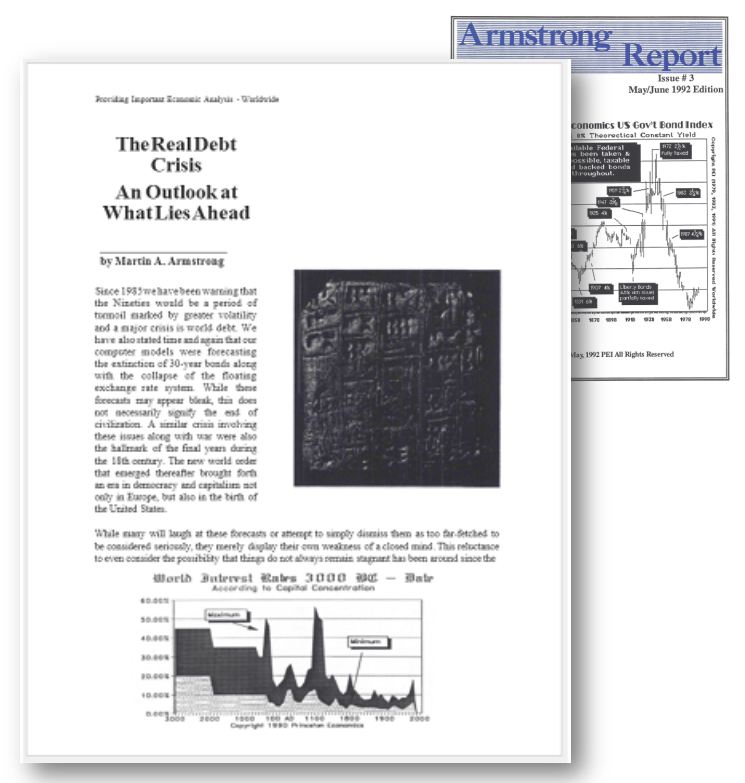 Back in May/June 1992, we put out a report on the long-term implications of what our computer was projecting. The year 1998 marked the Russian default which sparked the Long-Term Capital Management Crisis and the first time the Federal Reserve had to bail out a hedge fund. Heading into the end of this cycle in 2032, we would see the extinction of 30-year bonds and the demise of the floating exchange rate system. This time what comes after 2032 will be indeed a new world order for what appears on the horizon is the collapse of our present system which is being accelerated by Klaus Schwab and his World Economic Forum. These forecasts, along with 2016 being the first time a non-politician would win, sounded far-fetched back then. But this is simply how economies and societies unfold. It was not some premonition. It was just history repeating itself.

“Since 1985 we have been warning that the Nineties would be a period of turmoil marked by greater volatility and a major crisis in world debt. We have also stated time and again that our computer models were forecasting the extinction of 30-year bonds along with the collapse of the floating exchange rate system. While these forecasts may appear bleak, this does not necessarily signify the end of civilization. A similar crisis involving these issues along with war were also the hallmark of the final years during the 18th century. The new world order that emerged thereafter brought forth an era in democracy and capitalism not only in Europe, but also in the birth of the United States.

While many will laugh at these forecasts or attempt to simply dismiss them as too far-fetched to be considered seriously, they merely display their own weakness of a closed mind.”