The Coming Crisis in Central Banking 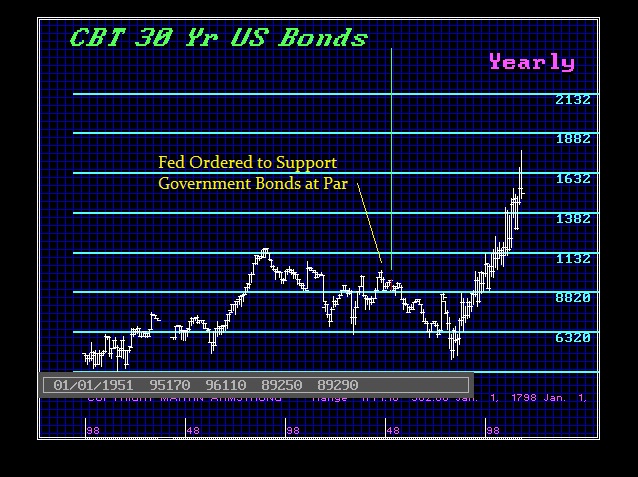 The question of when will central banks fail is a popular one that comes in. Suffice it to say, the turmoil will hit Europe first. While so many people blame the Fed for all sorts of things, you must realize that Roosevelt usurped the Fed during the Great Depression and imposed a single interest rate administered from Washington. It was during April 1942, when the Department of the Treasury requested the Federal Reserve formally to commit to maintaining a low interest-rate peg of 3/8% on short-term Treasury bills. The Fed also implicitly capped the rate on long-term Treasury bonds at 2.5%. This became known as the “peg” with the express goal to stabilize the securities market and allow the federal government to engage in cheaper debt financing of World War II, which the United States had entered in December 1941.

Today, we have extraordinary low rates of interest that have funded government socialism, but this policy has wiped out the real bond markets insofar as being a viable market long-term. The World War II accord to maintain low rates was followed by a collapse in bonds after 1951 once the accord ended. We will see the same outcome moving forward.

At the time, in order for the Fed to maintain the peg, it was ordered to give up control of the size of its portfolio as well as the money stock. That is also what has happened today with Quantitative Easing among all central banks. Frankly, the Fed back then maintained the low interest rate by buying large amounts of government securities, which also increased the money supply domestically at the time. Because the Fed was committed to a specific rate by the peg, it was compelled to keep buying securities even if the members of the Federal Open Market Committee (FOMC) disagreed.

After the war, politicians were afraid a new depression would emerge as they always fight the last war. They ordered the Fed to maintain the peg even after 1945. The United States entered the Korean War in June 1950. The problem was inflation not deflation. The FOMC of the Fed argued strongly that the continuation of the peg would lead to excessive inflation. A real confrontation with the politicians was brewing all year and they were opposed by the Treasury who naturally wanted to keep borrowing at cheap rates.

Everything exploded by February 1951. Inflation had soared reaching 21%. As the Korean War intensified, the Fed faced the possibility of having to monetize a substantial issuance of new government debt coming out to fund that war. This only intensified inflation. Nevertheless, Harry S. Truman became president in 1945 and it was his administration that continued to urge the Fed to maintain the peg.

The financial crisis erupted into a major conflict when Truman invited the entire FOMC to a meeting at the White House. Truman then issued a statement saying that the FOMC had “pledged its support to President Truman to maintain the stability of Government securities as long as the emergency lasts.” In reality, the FOMC had made no such pledge. Conflicting stories began to appear about the dispute in the press. The Fed then made an unprecedented move – they released the minutes of the FOMC’s meeting with the president.

The conflict erupted in full view. The Fed revolted against the politicians. Shortly thereafter, the Fed informed the Treasury that as of February 19th, 1951, it would no longer “maintain the existing situation.” The Treasury was caught in a crisis for it needed to refund existing debt and issue new debt, a situation governments are still in today. They never pay off debt, they simply roll forever.

The government had no choice but to negotiate a compromise under which the Fed would continue to support the price of five-year notes for a short time, but after that the bond market would be on its own. It was on March 4, 1951, when the Treasury and the Fed issued a statement saying they had “reached full accord with respect to debt management and monetary policies to be pursued in furthering their common purpose and to assure the successful financing of the government’s requirements and, at the same time, to minimize monetization of the public debt.”

It was this accord that created a free market in government securities. The likelihood that government debt becomes extinct will appear by 2023. We can see that the bond market began to crash as interest rates were at last free to move after 1951. This is the most likely outcome of the voluntary Quantitative Easing that is really a critical issue more so in Europe and Japan and less at the Fed.

This time, the central banks have gone and done this themselves and they are trapped. They cannot sell the debt they have bought and therefore, we are looking at a crisis when that debt has to roll. The European Central Bank holds more than 40% of the government debt for the whole of Europe. Once that matures, who will buy the new debt the next time around?

We are looking at a deflationary impact by default, which can wipe out the central banks. This time, QE programs allowed the money they injected to buy back bonds to go anywhere. Capital flight from the local economy resulted in deflation as the money never truly stimulated anything. So when the bonds mature, will the government be able to repay those bonds buy selling new ones? Who will be the buyer? This is the coming Sovereign Debt Crisis. OWN NO GOVERNMENT PAPER PERIOD!!!!!!!!!!!!!!!!!!!!!!!!!!!!!!!

« Rogoff: An Elitist Who Has No Respect for the People
Trade v Banking – The Real Issue »