You mentioned in a recent blog post that the ECB, unlike the FED, can go bankrupt.

Can you explain further?

Not sure where you get the time, energy and resources to research and write all that you do buy it is truly amazing.

ANSWER: The Federal Reserve does not need permission to create elastic money. It has the authority to expand or contract its balance sheet. However, it cannot simply print money out of thin air. The ECB is the only institution that can authorize the printing of euro banknotes. The Federal Reserve must back the banknotes by purchasing US government bonds. The Fed buys and sells US government bonds to influence the money supply whereas the ECB influences the supply of euros in the market by directly controlling the number of euros available to eligible member banks. This structure was created because of Germany’s obsession with its own hyperinflation of the 1920s.

There are four decision-making bodies of the ECB that are mandated to undertake the objectives of the institution. These bodies include the Governing Council, Executive Board, the General Council, and the Supervisory Board.

The Governing Council comprises six members of the Executive Board and Governors of the national central banks of the euro area member states. The Council members meet twice a month at the institution’s offices in Germany. Its primary function is the formulation of monetary policy for the Eurozone area. That means it makes the decisions on monetary objectives, interest rates, and the supply of reserves in the Eurosystem.

The General Council is a transitional body that carries out responsibilities taken over from the European Monetary Institute (EMI). It comprises the President, Vice-President, and Governors of the national central banks of the EU member states. The body will continue to exist until all EU member states have adopted the euro. As of 2017, only 19 out of the 28 EU member states have taken up the euro as their single currency. This body is charged with fixing the exchange rates of currencies for countries preparing to join the Eurozone.

The Supervisory Board comprises the chair, vice-chair, four ECB representatives, and representatives of national supervisors. The board plans and executes the supervisory function of the ECB. It also proposes draft decisions for the Governing Council through the non-objection procedure.

The ECB was granted a monopoly status on the issuing of banknotes in the Eurozone area. The ECB makes weekly announcements on the amount of money it wishes to supply and the minimum acceptable interest rate. Eligible banks that have provided collateral then place their bids for the ECB funds through an auction mechanism. Once the banks have obtained funds, they use them to advance loans to individuals and businesses all in theory.

The European Central Bank is also responsible for banking supervision in all the EU member states. The ECB carries out this function through the Single Supervisory Mechanism (SSM) that comprises the ECB and competent national authorities in the member countries. Therefore, the ECB has the power to grant and withdraw banking licenses, conduct supervisory reviews, and set higher capital requirements to counter financial risks. The ECB directly supervises 124 significant banks that hold 82% of the banking assets in the Euro area.

The tensions within Europe have never abated between members. The first President of the Bank was Wim Duisenberg, who was the former president of the Dutch central bank. The French objected and demanded that the ECB should be headed by a Frenchman, Jean-Claude Trichet, because the ECB was to be located in Germany. A gentleman’s agreement was finally reached whereby Duisenberg would step down before the end of his mandate and Trichet would become the head of the ECB in November 2003. He was replaced by an Italian, Mario Draghi, who became the head of the ECB between 2011-2019. Now we have Christine Lagarde, who is French, taking over the ECB from Draghi. 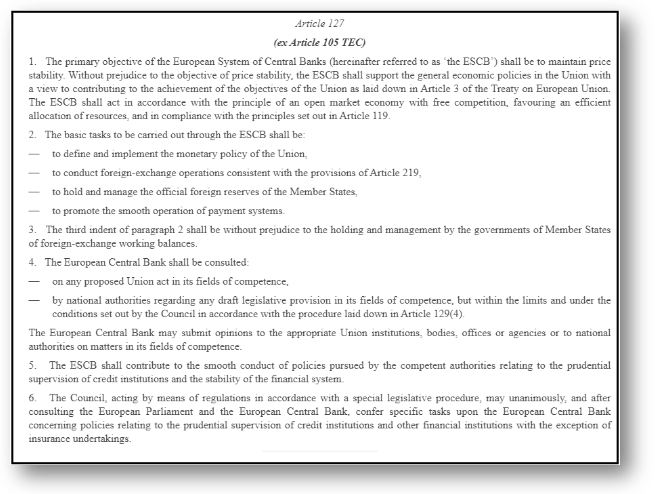 The primary objective of the European Central Bank was laid out in Article 127(1) of the Treaty on the Functioning of the European Union. That stated its authority was to maintain price stability within the Eurozone which is rather vague. The Governing Council in October 1998 took it upon themselves to define “price stability” as meaning inflation of under 2% on “a year-on-year increase in the Harmonised Index of Consumer Prices (HICP) for the euro area of below 2%.” Therefore, the ECB was created differently from that of the Federal Reserve System which was intended to be simply an independent system where the banks were shareholders because that was a contribution to create the Fed outside of taxpayer money. Hence, the ECB has only one primary objective and it was envisioned as a division of the government. The “price stability” has never been defined in statutory law which leaves a very wide view of interpretation.

The Governing Council sought to confirm this definition of “price stability” in May 2003. They clarified that “in the pursuit of price stability, it aims to maintain inflation rates below, but close to, 2% over the medium term.” Hence, all such lending to credit institutions had to be collateralized as required by Article 18 of the Statute of the ESCB. This so-called “clarification” is by no means a defined law.  Therefore, this vague directive of maintaining “price stability” is further complicated because, under the Treaty, it also directs that “the ESCB shall support the general economic policies in the Union with a view to contributing to the achievement of the objectives of the Union.” This leaves the door wide open for the ECB under Legarde to suddenly declare that climate change must be a policy of the ECB. This clearly makes the ECB an arm of the EU Commission and not independent as is the case with the Federal Reserve.

Since November 4, 2014, the ECB has been responsible for specific tasks concerning policies relating to the prudential supervision of credit institutions within the framework of the Single Supervisory Mechanism. As a banking supervisor, the ECB also has an advisory role in assessing the resolution plans of credit institutions.

The ECB President reports to the European Parliament on monetary issues in a quarterly Monetary Dialogue. The ECB also prepares an annual report on monetary policy which is presented before Parliament. Parliament adopts a resolution on this annual report. The new supervisory responsibilities of the ECB are matched with additional accountability requirements as laid down in the SSM Regulation. The practical modalities are governed by an Interinstitutional Agreement (IIA) between Parliament and the ECB. The accountability arrangements include the appearance of the Chair of the Supervisory Board before the competent committee; answering questions asked by Parliament, and confidential oral discussions with the Chair and Vice-Chair of the competent committee upon request. In addition, the ECB prepares an annual supervisory report, which is presented to Parliament by the Chair of the Supervisory Board.

Interinstitutional Agreement (IIA) between Parliament and the ECB

The ECB is trapped. It cannot raise rates to raise money and it has destroyed its bond market. The only way out is to default on all debt and they will do that by declaring it to be now a perpetual debt that only pays interest like an annuity. This will allow them to escape the formal default which is inevitable.