You Do as They Say Or Else 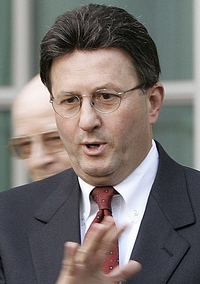 This whole NSA thing is bringing up a lot of questions. The former Qwest CEO Joseph Nacchio is currently serving a six-year prison sentence for insider trading in April 2007 because he sold $52 million of stock in the spring of 2001. The prosecution argued he KNEW that the telecommunications carrier appeared to be deteriorating. Nacchio argued that was not true and that he believed Qwest was about to win secret government contract that would keep Quest in the black. He would be guilty ONLY if he KNEW the company would decline and that was the reason he sold. If he sold simply to get money and it then happened to lose contracts, that would not be a crime. The conviction is based on a STATE OF MIND. Naturally, his claim that the government stopped offering the company lucrative contracts ONLY after Qwest refused to cooperate with a NSA (National Security Agency) surveillance program in February 2001 that is doing precisely what they have been caught doing today.

In my own case, AFTER I refused to build the model in Washington for the CIA, the case began. Many staff to this day believe that was the reason behind the case. While I was supposed to be in contempt of court to turn over assets IN CASE I might owe something it turned out I did not, documents suggest otherwise that the “unpublic” demands made to Martin Weiss who was willing to rent Princeton to keep the forecasting going but was told that I had to turn over the source code to the model or else Princeton Economics would be shut down.

Then there was the case of a CIA operative who spent 22 years in prison after his daughter helped to get him out. The CIA claimed he never worked for them and was selling arms to Libya on his own. His daughter later found evidence the government lied and he was finally released.

A Filmaker claims an innocent Man was jailed to cover up CIA Drug Buisness. These stories go on and on. What is curious is how the government does whatever it likes and juries believe their government is honest and would never lie.

The greatest problem we have is that people like Diane Fineberg will NEVER allow the government to really be investigated. There is no hope of cleaning up the system because you cannot sue the government only it people and they are the only people who can press charges ensuring they will never prosecute themselves. Thomas Jefferson included in the Declaration of Independence the very same complaint about the king.

For protecting them [government employees], by a mock Trial, from punishment for any Murders which they should commit on the Inhabitants of these States:

« The Euro For Next Week
Dow Jones – Overbought or Still Just a Bun in the Oven? »