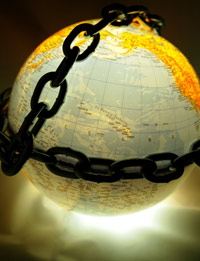 A 30-year trend of trade growing at twice the speed of the global economy has come to an end thanks to the USA hunting Americans worldwide. I have been warning these morons, so desperate for money, have been systemically destroying the world economy. The official trend in global trade is now starting to turn negative based on our preliminary numbers. The FT has also noted this trend may be in a structural shift regarding in world business. This is massively deflationary and amounts to the same net effect of protectionism from the 1930s. These people are destroying everything that was built all because they will NOT revise the monetary system. They can only see their own reins of power and are concerned about keeping that power and to hell with everything else.

« Why Professional Politicians Are Dangerous
NSA Defends Itself – Justifies Even Spying on Friends & Their Leaders As Necessary – You wouldn’t want to be Married to him! »