World at a Glance 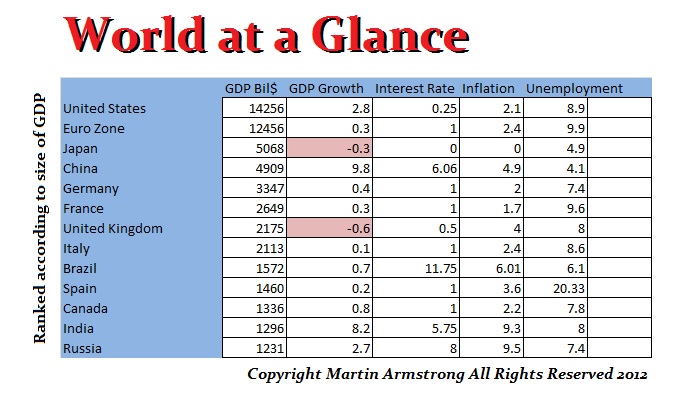 One of the primary mistakes that the Federal Reserve is making has been to follow the same policy of Japan with exceptionally low interest rates. While the theory that lower interest rates will stimulate borrowing, the false assumptions are many. (1) banks will pass on the savings, (2) they ignore the devastation imposed upon the retired community who have saved all their lives only to see fixed income collapse, and (3) interest rates must naturally compensate the lender for the loss in purchasing power created by inflation.

Look closely at this table. The two countries with negative economic growth are those with the lowest rate of interest. Inflation will rise not by lowering interest rates, but when people resume a normal life posture. That includes spending as well as investment. That cannot be stimulated by lowering interest rates which sharply reduces the fixed income for savers. If they feel their income is reduced, they correspondingly reduce their spending and that lowers GDP diminishing the optimism that the economy will recover. On top of this, as long as government continues to raise taxes, they will further reduce the incentive of small business to hire and this merely fuels the rising unemployment. Government does not further GDP or create meaningful economic jobs by raising taxes or hiring more public servants that drain the economy producing NOTHING for society. The youth today coming out of school even in the United States are finding it hard to obtain meaningful employment. In Spain, unemployment among the youth has exceeded 60%.

Inflation will rise not with QE1,2,3,4,5,6, … or 2000. It will rise when government stops lining the pockets of the bankers and just for once understand that the best solution is a free market that stops exploiting the savings of people for the benefits of the special interests. Stop the rhetoric that is fueling hatred of the so called “rich” as the problem when in fact it has been a political problem of complete fiscal irresponsibility. Obama blames the rich while behind the curtain taking 747s full of cash from the banks and what may appear to be even foreign sources as do the Republicans. Obama should win, but at what cost to civil unrest by 2014?