Will we Have Another WACO this time in Nevada? 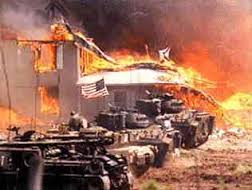 The Feds are gathering and have brought in hired guns. We are more likely than not headed into a military confrontation – the first since WACO. Keep in mind that Obama’s head of the Justice Department, Eric Holder now Attorney General, called the shots on WACO back then. He got away with it before – why not again? There is a hope that if enough people show up the Feds will stand-down. The likelihood of the Feds ever backing down is highly unlikely, The Federal Government is severely disconnected from the people and views anyone who stands up to them as a criminal and domestic terrorist. This is merely a dress rehearsal for the next 5 years that we face – a rising confrontation between the people and the government.