With each downturn in the Economic Confidence Model in this 51.6 year long-wave, the decline gets worse and the volatility rises. This is part of the process building until we reach the cataclysmic turned at the end 2032. The polls in Austria are very interesting for this has been a nation that historically represents the leading indicator. Even the banking collapse began in 1931 in Austria.

The current polls in Austria illustrate the problems ahead. Only 7% of Austrians even consider gold for investment. In addition, 51 percent of all Austrians do not believe in any economic recovery will be achieved in Europe in the coming twelve months. What are Austrians doing? They are hoarding cash on demand deposits. 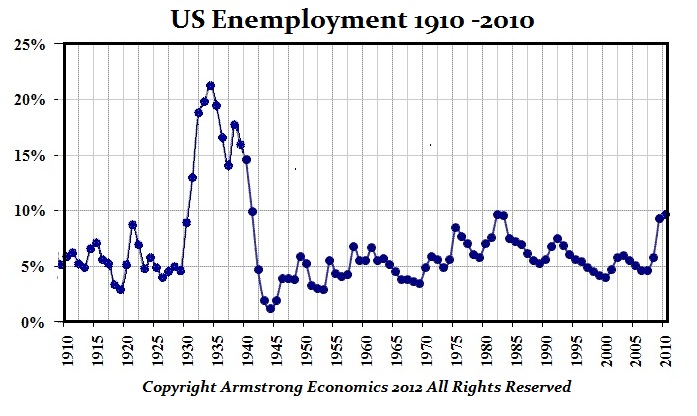 When the economy turns down, we will be starting from a much higher global level in unemployment – more than DOUBLE from where we began the Great Depression. If we were to follow the same percentage advance, 5% to 25%, then from 12% we would rise to 60%. This seems a bit drastic. Nevertheless, we will exceed the 25% level and we are more likely to see this advance fueled more by the collapse in the public sector. All these people working for municipal governments are going to find themselves out of luck.

The great difference we can see from the chart below is that we saw the collapse in agricultural workers as the combustion engine created tractors and eliminated jobs. The same trend is happening now with the internet. Government has been in a huge bull market and its ranks of employment rallied from 22% to 33% by 1980 and today it is nearing 40%. These career politicians cannot get through their head that they have become the new great evil empire. It is not Russia or China – it is them seeking to exploit the people dramatically to sustain their own life-style.

« Tax & The Top 1% – Who Are They? – The Pending Sovereign Debt Big Bang
Ukraine Moving into Civil War – Turkey in Constitutional Crisis »