Why US Regulators Cannot Be Trusted

QUESTION: Mr. Armstrong, how do you explain away even the big corporations involved in manipulating markets like the Sumitomo copper manipulation that the company admitted an almost $2 billion loss claiming a rogue trader?

ANSWER: Let me make one point clear. WHATEVER you have read about manipulations is most likely totally wrong. I have NEVER seen that Sumitomo copper manipulation covered in the press by anyone with any knowledge whatsoever of the behind-the-scene-machinations. They all just take whatever they are told and print it from sources they may think are reliable but are plants to begin with. There are too few real investigative journalists these days.

I am not someone who makes up bullshit, nor do I speculate about things I have no idea about as 99% of the nonsense that floats around claiming manipulations. These people have NEVER been inside and are clueless about the real view behind the curtain. PhiBro’s brokers walked across the floor at the COMEX and showed Buffet’s silver orders to my brokers trying to get me to join them because they knew I did not trust the “club”. Safra’s bank directly solicited me to join them in Russia in Hermitage Capital. I have first hand knowledge not speculation.

Sumitomo lost at least $1.8 billion as a result of what it said were unauthorized trades over a 10-year period by its trader Mr. Hamanaka, who was later charged on allegations that he manipulated the price of the metal, which then lost a third of its value on world markets in less than two months.

You want to pretend Sumitomo was complacent and did not know about Hamanaka’s purchases? Fine – and Obama really cares about your future too and will tuck you in at night. It was the NY money-center banks that were shorting copper trying to break it against Sumitomo. It was an outright war. Sumitomo kept buying trying to defend itself against the “club”. The CFTC argued the banker’s position Sumitomo was manipulating the market with its buys but they never reported who made all the sales.

The CFTC attorney who started the Sumitomo case was the same attorney who started the case against Princeton. When he got caught sharing inside info from the CFTC with undisclosed people (I believe were the bankers), to avoid a scandal he was simply allowed to resign and surrender his legal license. Nobody else was charged at all. His name was Denis O’Keefe. 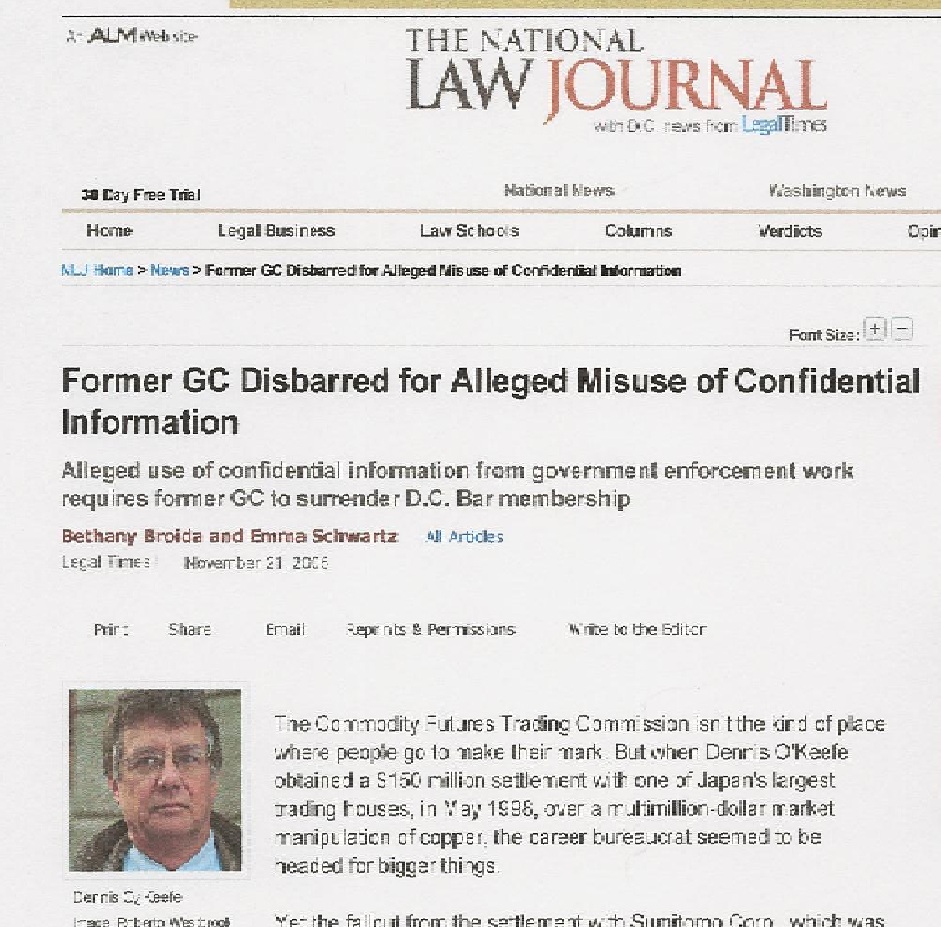 Anyone who thinks they can read the press and KNOW the truth behind manipulations is a fool. Often the press is not in a position to really know what is happening because they trust the wrong sources. The machinations behind the curtain are far more complex than anyone ever contemplated. I disagree with all the stories of manipulations because 99% are dead wrong. They charged Sumitomo who was the victim to protect the banks and they bailed out Long-Term Capital Management hedge fund without any authority to hide the losses of the banks. They let Lehman and Bear Stearns collapse claiming they had no authority but the next day bailed out AIG insurance when there was also no authority. Those in government lie all the time – nobody connects the dots. This is why you cannot trust anything a regulator in the USA has to say about anyone.

Even with me, the CFTC actually issued a subpoena claiming I was “manipulating the world economy” which I dare say was way over the top. It was because I REFUSED to join the “club” and they viewed me as a threat assuming I had the bulk of the real money clients globally. People judge others by themselves. They assumed I was correct not because of a model, but because I had more clients than anyone. They kept trying to get me to join because they judged me by themselves – influential. That was the thrust of the CFTC subpoena to see who all my clients were worldwide. I defended in court against that subpoena and won. Only my adversaries (“club”) could move the government to do that.

This is why the latest demands that the White House exclude banks from European regulation is the thrust of the entire free trade agreement. Talk about puppets on a string. Europe does not trust US regulators for a very good reason – they are sold to the highest bidder just as is the case with the White House. Welcome to the real world.