Why the 2014 Precious Metals Outlook Report is Important 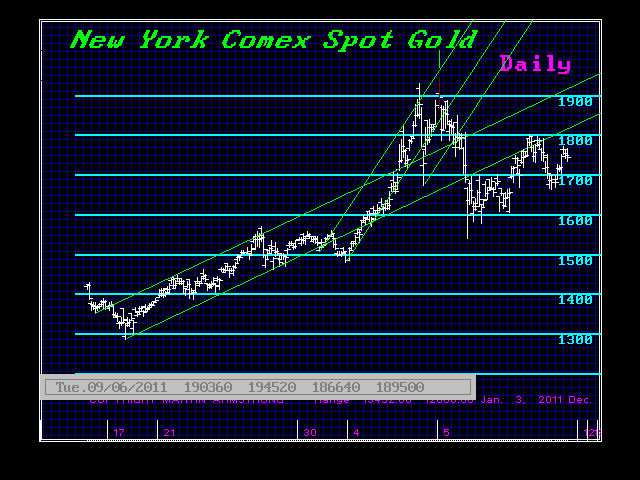 I just ordered the Gold report. Wanted you to know I am not a gold bug….just interested in a market that is BOTTOMING…with good upside as opposed to the current US markets.

Like many, just not interested in these valuations as the “perceived” risk is greater than a market that potentially has significant upside when it turns.

REPLY: This report is for real investors. It is the “real thing” not the propaganda that turns so many people OFF. Gold is a viable and NECESSARY component of your portfolio. I give $20 gold pieces to the children in the family for birthdays etc. Not as an “investment” but as a “hedge” – the just in case you gonna need it hedge I call plan B.

This report covers the downside that the Goldbugs deny exists amazingly since September 6th, 2011 when it made an absolutely perfect channel move as I have defined the term,. Where the low should form and at what level from an unbiased and objective perspective and then the projections for the rally thereafter.

I do not care if there is gold in Fort Knox or not since (1) you will never prove it, and (2) that will never convince non-Goldbugs to buy anything. That is like talking about the little grey men that took you for a ride around the solar system. I do not want to hear about “fiat” for that is nonsense and it did not prevent a 19 year bear market. A government declaring gold is now $5,000 is still fiat for you cannot dictate the value of money. And as for the crowd that says gold is money – sorry, money is what the majority of people accept and it can be sea shells. Then we have the crowd that are really communists in drag who preach money should be a store of value. Fine, if money cannot decline in purchasing power then assets cannot rise nor can taxes, and wages. It is impossible to have it both ways. These sorts of claims are laughed at by the MAJORITY of people and they will NEVER move them to buy gold and gold ain’t going up until they are on board! Sorry – that is a fact of life. Gold is down from $1945 despite all the yelling and screaming.

Gold is a hedge against GOVERNMENT. That is why people in China and Eastern Europe even bought gold. They do not trust government. In the West, the Scottish elections proved the thinking process – they trust government and have their hand out. Until that changes, sorry they will not buy gold as long as the still believe in politicians. Claiming the Chinese are buying gold for the reasons touted by gold promoters is simply dishonest. Claiming gold is suppressed because of “paper gold” is absurd for futures have existed since Babylonian times when the business cycle also existed giving rise to the necessity of a futures contract. It is that same leverage that makes it rally from a low as shorts have to buy back. It is all connected.

The “real” big money follows our stuff BECAUSE it is NOT OPINION. They always ask “Marty. What’s the computer say now?” In a discussion, they might ask my “opinion” do you think the computer will do this or that or some political event because I have extensive global connections just about everywhere from Scotland and Ukraine, to Cyprus, Middle East, Russia, Asia, Quebec, Mexico, Australia, Japan, China. Singapore, everywhere. That is because of the COMPUTER and everyone around the globe respects its non-political forecasts detached from opinion. That is why they were after the source code.

It ain’t me babe – as the song use to go. So this report will have a greater influence outside the Goldbug camp because “real” investors want just the facts and the opportunities without the wild claims of $10,000 in 3 months. I am not selling gold coins and bars so I do not have to only say buy for fear my sales will decline.