Well that post has brought tons of emails from those in the engineering world. Glad the light has gone off. We need to turn it on in government. One comment wrote:

Markets decline not because of external factors, conspiracies, or manipulations. Those types of external factors can NEVER change trend, but merely increase the VELOCITY of that market leading to VOLATILITY be creating confusion. Changes in TREND takes place ONLY from internal conditions – never external. This is why changing the systemic structure of the economy (taxation i.e.) is so dangerous because it changes the internal mechanism that propels the economy. 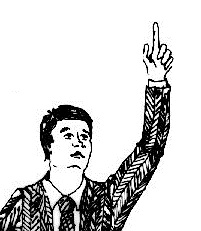 Hold you arm straight up in the air. Not a hard thing to do for most people. Now keep it there. Suddenly your arm will grow heavy and you will run out of energy to sustain that simple exercise. There is no external force that will compel you to lower your arm other than gravity. Nobody else has to push your arm down. It does not take a strong wind. Yes those things could happen, but you would still have the energy to fight back. Yet, without those external factors, your arm will grow heavy in and of itself and you will collapse lacking the strength to sustain the simple act of keeping your arm in the air. Gravity will win.

Just as there cannot be a perpetual motion without end, no system is sustainable regardless if we are talking about the sun eventually running out of fuel and dying, holding your arm straight up in the air, or keeping a market perpetually rising. The market must collapse, regroup, and in the process rejuvenate itself for the next rally. Japan created a 23 year Long Depression by trying to prevent the decline. Gravity won. This is not the result of manipulation or conspiracy. The sooner we learn these basic principles, we can progress to the next journey of knowledge as a society. Unless we learn to live with the cycles, compensate for them, and move on, we will be like a broken record stuck in the same grove repeating the same thing over and over again eternally. It is like Joseph in the Bible warning there will be 7 years or plenty and 7 years of drought. Eliminate the cycle and you kill the very essence of life like the White Earth Effect.

It took man centuries to admit the world was not flat against rational explanations that if it were a ball, how could you possibly stand upside down? Surely you would fall off! Well understanding that ALL energy moves in a cyclical manner is the same thing. Stop the Salem witch hunts. If we could just grasp this understanding, guess what? We end this stupid government attempts to manipulate society that only aggravates the system and destroys our future, and then they go lock up the people and blame them for what they themselves are causing. The definition of insanity is doing the same thing repeatedly and expecting a different result. Hello! Anyone reading history lately?