There is no government that has prosecuted its citizens more than the United States. The USA has more people in prison than Europe, China, and Russia nearly even combined. New York City and Mayor Bloomberg spends $168,000 per year per inmate. When you consider that only 4% of the people in prison are there for some violent crime, it is mind-boggling. So it is time to start spending this money to clean up government. Dianne Feinstein has committed a felony and she now deserves that same tax-free living she subjects others to. It is called CONSPIRACY. The Roman Emperor Maximinus (235-238AD) prosecuted one senator for a crime and then prosecuted 4,000 other people for agreeing with him in a CONSPIRACY. Perhaps what was good for Rome should be good for us right now as well?

Knowing that a court held that the NSA would violate the constitution depriving the entire nation of their civil rights paying the tech-companies to “voluntarily” comply with the wish lists of those in the NSA and Congress like Feinstein, makes each and everyone involved criminally guilty of a felony and they should be legally bound to resign as being unfit for office. Of course, that will never happen.

Where most countries only recognize attempts and actual acts for criminal prosecution, the USA prosecutes CONSPIRACY, which is defined as simply an agreement to perhaps attempt a crime that does not have to even take place. This is why the prisons are full. They allow someone who actually commits a crime to testify against others so he goes home. His “co-conspirators” did not even have to be there claiming they only agreed and were somehow behind the scenes involved. The proof required is only the testimony – that’s it. The most notorious English conspiracy trial was that of Sir Walter Raleigh (c. 1554 – 29 October 1618) who was implicated in a conspiracy by another to save himself. The so-called witness wrote his confession and Raleigh could not even question his accuser who they never showed in court. It was a sham trial. Raleigh was hated by the king and they staged a fake trial to “pretend” they were exercising justice. Welcome to the land of CONSPIRACY. 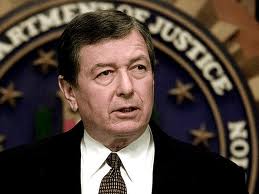 Our prisons are full because of one nasty man – the former corrupt Attorney General John Ashcroft. The prosecutors get credit for their career (1) by the number of convictions irrespective of what they did (like Raleigh), and (2) Ashcroft made it that there was no credit unless someone went to prison. Ashcroft of course would not tolerate a bronze statue of Justice with bare breasts and had her covered while he was in office, but he had no problem accepting an 18-month contract worth $28 million to $52 million steered to him by New Jersey prosecutors. Bronze Breasts are obscene but $28 million for 18 months is not. Corruption in Washington is just pervasive and they have no problem raising taxes to get theirs.

Under this legal foundation of CONSPIRACY, absolutely EVERY politician who has backed the NSA in their crimes is now knowingly guilty of CONSPIRACY and in a real world should be in prison now:

Even President Obama can legally be impeached for he has committed a felony as President of the United States no different than Richard Nixon. We are not talking about a blue dress here or having oral-cigar-sex while sitting on the seal of the United States in the oval office like Mr. Clinton. This is the REAL thing. Of course nothing will be done and nobody will EVER be charged for who can even charge them since most likely Eric Holder is also guilty.

No wonder the USA wanted to kill Snowden. He should be given man of the year. Those who called him a traitor are clearly guilty of CONSPIRACY.