We cannot Escape the Past Until We See The Future

COMMENT: I watched the Solution Conference and your explanation of two monetary systems being barter and representative was insightful. I can see why the goldbugs hate you and how they are trapped in yesterday’s world of a barter economy. You have a lot of work ahead of you for this is truly revolutionary. You have seen the next step in our evolutionary process that we have actually moved beyond the need for taxes. You are starting to be widely known in Germany. This is where your message resonates the most for those of us who see austerity is wrong for it too is still an antiquated concept based upon a barter economy.

Looking forward to your European tour

REPLY: Thank you. True, this message is lost on so many fighting the last war. I agree there are those so pessimistic they cannot see beyond their cave walls. As long as they still live in this distorted vision of a barter economy, we cannot escape to freedom. They tax us to death to get back money as if it were still some commodity because that is the way it has always been done. Well, here is this new invention of an airplane and we can fly. We do not have to tax people when money is no longer a barter system. The wealth of a nation is its PEOPLE. 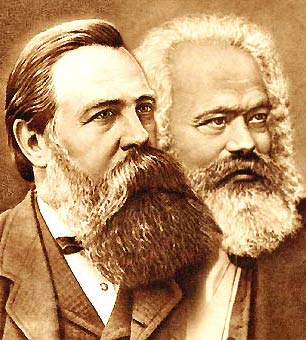 The Communist Manifesto was an 1848 political pamphlet by Karl Marx and Friedrich Engels. The Communist Manifesto summarizes Marx and Engels’ theories about the nature of society and politics, that in their own words, “The history of all hitherto existing society is the history of class struggles”. They did see only a piece of the puzzle of wealth. They saw that not even gold had value except for the labor involved in mining it and refining it. They wrongly saw only the labor and not the ideas that also create wealth.

Henry Ford’s introduction of the assembly line created the manufacturing age, but they saw this as exploiting the working class and focused upon the profit of Ford without crediting it was his vision that created the opportunity for labor. They also were blind to the increased production lowering the price of automobiles for the consumer and changed the entire economy from a train based system to a far more expansive mobility. They were stuck on this one aspect that a commodity’s value was determined by the cost of labor to produce it. They ignored entrepreneurship and that the consumer demand determines price.

You can manufacture something where the cost of production is too high and thus there is no demand. This is how the unions destroyed their own jobs. The Communist Manifesto focused on this narrow idea of value being labor and thus the capitalist society would eventually be replaced by socialism, and then finally communism.

We are still operating by Marx-Engels’ philosophy. We attack those who create jobs and discourage entrepreneurship. We tax people progressively following Marxist philosophy and we continually reduce our economic growth with expanding the cost of government. This is the collapse of socialism that is evolving. We cannot escape this 19th century thinking until we embrace the simple fact that money is no longer a commodity barter system by the TOTAL PRODUCTIVITY of a nation, which includes all aspects from the idea like Ford who has a vision to the common worker for grooms your lawn.

Those who cannot leave behind the 19th century hold the rest of us back and endanger our future for we cannot escape the repetitive cycle of boom and bust until we see the whole and learn like Joseph’s advice to the Pharaoh – live with the cycle. This is one of the Ten Commandments – never covet your neighbor’s goods. As long as we violate that fundamental law, we will never have a society that is fair or functions with respect of human rights.