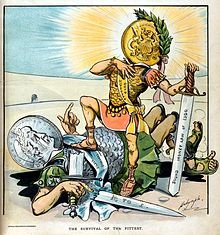 You recently said in your Bitcoin article quoted below:  “This is why they have been waging war on gold”, can you please explain who they are and how one would wage war on gold?

ANSWER: The war is not about price, it is about an alternative that could feed the underground economy. As taxes rise, things like Bitcoin will be shut down because it will deprive the government of taxes. They are concerned and desperate for money. Harry Reed is already talking about another $1 trillion tax hike. Democrats are floating lowering corporate tax rates to 18% but eliminating all tax breaks and making all operations overseas taxed here as well. That will create an international war for taxes. A company will be denied deduction for what it pays in taxes to another country. This is a WAR not just on gold, but on everything and everyone. They think if they just collect everything they will solve the problem. They will not reform the system. They are digging in their heels to justify a system that can only collapse.

They do not understand that their borrowing competes for the same pool of resources that is shrinking. This reduces the willingness of banks to lend to small business when (1) they have government debt, and (2) they can trade with other people’s money. Why lend to you to hire employees when they can make guaranteed trades manipulating Libor or something else?

We have to stop government borrowing, end taxation federally, print what we need to pay for federal government, privatize departments so people are qualified to work, install term limit to end career politicians and the corruption it brings, and this is just for starters.