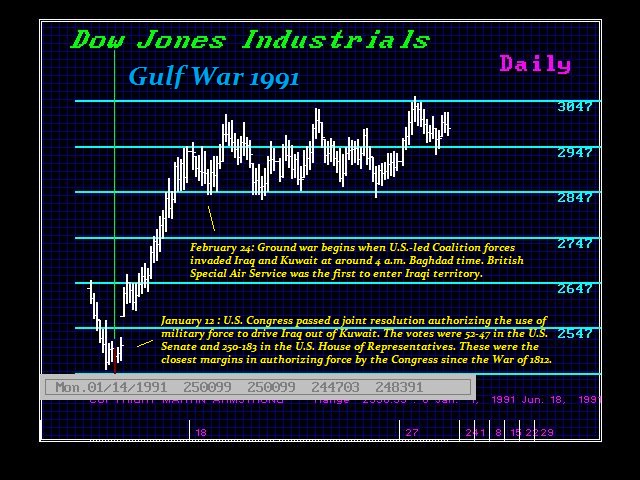 Many people are talking about a stock market crash when Obama invades Syria. When we look at that historically, war does not create a major decline in stocks. Here is a chart of the Dow for the Gulf War in 1991. The market rallied after Congress authorized force. The idea that people will dump stocks and move to a flight to quality being bonds. That flight to quality is not likely to take place and we are in a very interesting position because this event may begin the decoupling of bonds as the target of such a flight. When governments have lost credibility in the debt markets, corporate bonds will be far more secure than government.

There is NO DOUBT that Obama is fighting very hard for this authority against a 59% poll against him and a 69% poll that shows American do not believe this has anything to do with national security. Obama could care less about what the people want since he will not run again. But this will have an important impact upon the 2016 elections because Obama is not trying to do a single strike and leave the Syrian government intact. He is out to remove the government purely for the pipeline. This will be an escalating event – not a single strike. If it was to be a limited single strike, Obama would back-off. What he is counting on is for a retaliation from Syria and that may take the form of an attack on an American ship. Russia get the chance to test its systems against the Americans using the cover of Syria. It is a win win for them – live target practice.

However, Syria is not a key oil producer. It is needed for the pipeline. Syria has historically been important for that is where the Silk Road took you from Ancient times. It is the crossroads between Egypt and Europe. If I were Putin, I would be using this as a great way to flex muscles against its main enemy – America. Obama is either brain-dead or recognizes the real risks of attacking Syria for its supports would love a free shot at the USA. With 59% of Americans against this nonsense, Obama seems desperate to do this at any price. He is counting on retaliation and that will be the excuse to expand the war.

« Confiscation of Pensions – How Syria is Setting the Stage.
Swiss move to End Bank Proprietary Trading »