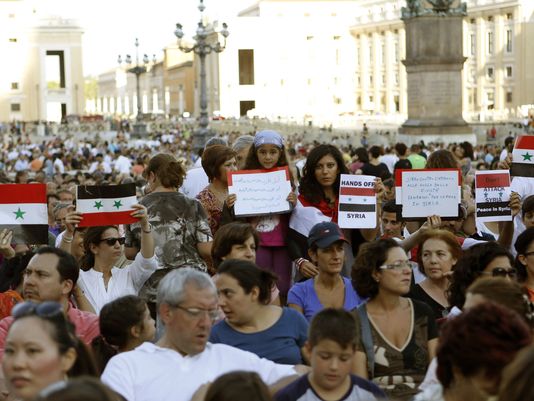 On Saturday, Pope Francis urged world leaders to stop a “spiral of sorrow and death” in Syria. He held a special five-hour prayer service that was attended by 100,000 people in Rome. Even Italian Muslims joined the Pope in his vigual for peace. There has never been such a mass of anti-Americanism perhaps in history. This entire affair is demonstrating Obama is way off course. Kerry is bullshitting with claims that this impacts the security of every American. I do not think so – but the NSA and IRS scandal do! Send the troops into those agencies if you really care about the security of American citizens. His lies are up there with the Weapons of Mass Destruction Cheney made to help his Halliburton make a fortune. So does the Obama hunt for “wealth” of any American overseas. He cannot grasp that he is single-handedly destroying American business for nobody can now have an account in Europe without the PRESUMPTION it is to hide money from Obama and crew.

« We will Hold A November Conference in Princeton New Jersey
Are They Going After Safe Deposit Boxes? »