US v Europe – the Divergence

I don’t know whether you planned it but after your post regarding people trying to pass your work off as their own a funny thing happened.
I was at a luncheon in London with some so called “important” and knowledgeable figures.
The conversation shifted regarding the economy and it took a totally different direction. Usually these people only talk about P/E, Debt to GDP etc etc however this time cycles were mentioned and how everything was revolving around 8+ years, boom and bust!! I have been attending these meetings for over 8 years and not once has a bicycle been mentioned let alone a cycle.

I was speechless and these so called economists started to talk about the EU and the USA. The error they made was they said the USA would rally along with Germany(DAX) into 2017! It was just one day later when you released your post on how the USA may rally into 2017 but Germany(Dax) may top in 2015.75(ecm). I laughed to myself when I read your post as clearly these fools read your blog and then try their very best to somehow pass it off as their own work.
I think that the DAX topping in 2015.75 and the USA markets rally for a further 18 months or so is something that has caught everyone by surprise.

May I ask when in history has their been a case where the US market rallied and the Europe started a deep decline this much earlier. I know from time to time they do not move in symphony but from what your computer is predicting this will be a historical event.

Thanks in advance for any light you can shed on this and well done again for all your work. I will be meeting these people again in 3 months and I don’t think I will keep my mouth closed. I may just have to say in front of 20+ people anyone ever heard of “Martin Armstrong.” Thumb sucking moment for these academics I think!!!

I leave you with what I always say to you, “form is temporary, class is permanent!” and you sir definitely have “class.”

ANSWER: There was a moderate advanced decline in European share markets ahead of the USA in 1929. However, sharp divergences appeared prior to World War I. The entire period of 1899-1917 is a chunk of interesting economic and financial history that is rarely told if at any point in time. Look at this chart of US Call Money rates. You will see the historic high was 1899 at virtually 200%.

In Russia, the stock exchange was in St Petersburg, not Moscow. On October 20th, 1899, during the ensuing economic crisis that was engulfing the world, on the initiative of the Minister of Finance S. J. Witte, who was an interventionist, wanted to create a syndicate in order to maintain exchange quotations in the middle of a stock market panic on Russian securities unfolding on the St. Petersburg stock exchange. It included the largest banks and bankers in St Petersburg at that time. These were active participants in the stock market, who then pledged to support the policies of Russian securities market. Simultaneously, the Ministry of Finance asked for the permission of Nicholas II to let the State Bank purchase the securities of joint stock companies for 25 million rubles, and to issue loans to Russian companies for their stocks, shares and bonds directly.

This became the age of syndicates or consortiums to intervene and support markets. They worked periodically on the basis of renewable contracts by mutual agreement whereby losses were charged to the joint-stock banks, and the profit was divided equally among them and the State Bank. Such interventionists scheme became the norm from the Panic of 1899.

The effectiveness of these consortiums or syndicates was clearly visible from the international perspective and later became the mode used by J.P. Morgan to stem the Panic of 1907 upon which the Federal Reserve was modeled. The consortium scheme began in France. It was thanks to such syndication of French financial groups that began in 1887 that the markets people managed to develop and a new age of internationalism was beginning. These French consortiums enabled the buying of Russian securities on the German stock market as many foreign stocks trade on the NYSE today. French Syndicates developed into an everyday occurrence for the Paris Stock Exchange. These groups were used for both:  organization of the subscription for securities in the IPO market of the day, and in support of their markets. The French syndicates were PRIVATE whereas the St Petersburg syndicates involved government and was the birth of government intervention in stock markets.

The Russian syndicates mirror the financial panics in the USA demonstrating that the world has been hard-wired connected for a very long time. The problem has been the lack of international correlation studies. The Panic of 1903 was the Rich Man’s Panic in the USA but it was seen in Russia as well. The Russian syndicate’s actions were minimal during the run up into 1903 which then gave way to intense government intervention in St Petersburg, whic h continued into the 1904-1906 period. The Russian syndicate spent more than 14 million rubles on this operation alone of which 9 million rubles was spent in 1905. When in 1906 and early 1907 the situation on the stock exchange began to normalize the sums were covered by the sale of the shares. Hence, the Russian syndicates sold into the rallies moving into 1907.

With the Panic of 1907, the Russian syndicates had to respond to the crisis

of 1908 purchasing 4.8 million rubles in shares. Overall, the Russian syndicates were actually profitable. This was totally astonishing for their goal was to stabilize the stock market buying dips and selling highs. They actually did a good job at following the business cycle. However, the Russian syndicate finished its work on April 26th, 1911 and produced a profit of 659,000 rubles. The Russian syndicate became known as the “exchange red cross”.

In November-December 1912, a new crisis was emerging – the eventual threat of war. The St Petersburg exchange declined sharply due to military events in the Balkans. By November 29, 1912, the mood swung back as confidence had been built up by the syndicate and others began stepping up to the plate. The Russian syndicate with the State Bank kept resurfacing and would reappear then disband. They had become the St. Petersburg Stock Exchange’ steady client. The operations were resumed in June 1913 and ended on September 13 the same year. They lasted the next year, until the closing 16th of July 1914 on the eve of World War I. The contemporary critics blamed the Russian syndicate and the State Bank for effectively their losses due to World War I. They had been doing a good job until that period. 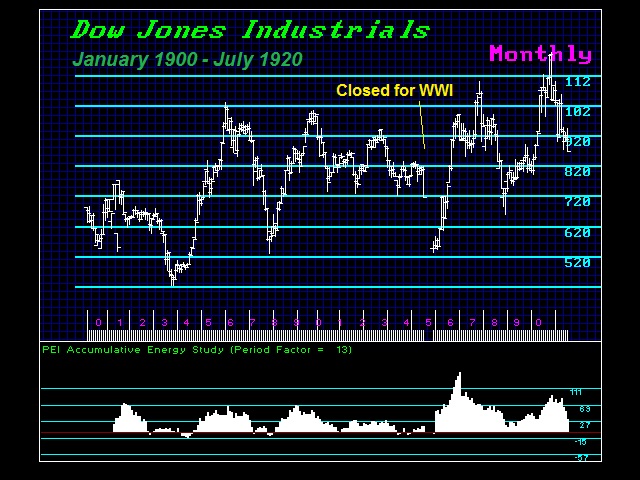 The divergence was rather significant. They closed the US stock market in July 1914 at the start of the war assuming stocks would collapse. They were under pressure to open the market and you can see there was the initial panic selling that formed the low. The US share market rallied from there on during the war. Capital fled to the USA and this created the huge divergence.

If we see the DAX form a high here in 2015 and it FAILS to press higher following the USA, this would be indicative of war. This is my concern given our Energy Model showing a spike high in the DAX but not the USA. Much of the financial history has been lost. For whatever reason, little has been saved and one is forced into contemporary accounts.