QUESTION: Can there be a recovery with rising unemployment? There seems to be some who say that is impossible.

ANSWER: This is the entire problem with analysis. There is NEVER a standard answer because the truth is far more complex. The common mistake in analysis is man’s desire to reduce everything to a single one-dimensional relationship – x up and y down. The mistake is the assumption we live in a linear world – we do not. The world is non-linear. Nothing in life is linear from weather to life. We are born and we die – everything in between is subject to interpretation. 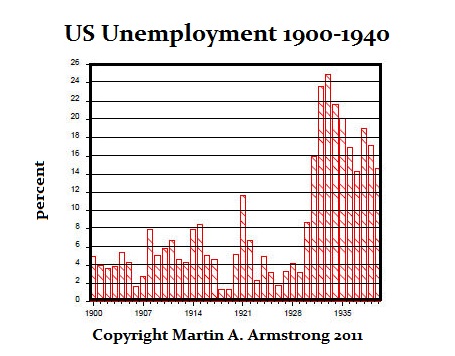 US unemployment peaked at 25% in 1933. It declined to 14.2% for 1937, which was still way above the unemployment levels of the extreme peaks for the Panics of 1907 and 1919. There is no empirical relationship that can ever be reduced to any formula because it depends entirely upon capital flows.

So the answer is not a one-for-one relationship. The truth is more complex and it is a multifaceted formula that is beyond all comprehension. It also depends how and why the unemployment is rising. The sharp rise in unemployment had NOTHING to do with the economic decline during the Great Depression – it was the Dust Bowl that forced farmers to become skilled labor. Farm employment from from 41% in 1900 to 3% by 1980. This set the stage for the economic boom postwar.

We face rising unemployment from the PUBLIC sector. This is positive for these people consume wealth and contribute nothing to the national wealth. The shift of employment from PUBLIC to PRIVATE will be extremely bullish long-term. Therefore, rising unemployment at this time will have no appreciable impact on the stock market for (1) we will be reducing the costs of government and (2) we will see capital inflows. When the capital flows change direction after 2015.75, then unemployment will rise from the PRIVATE sector and that will be negative rather than positive.