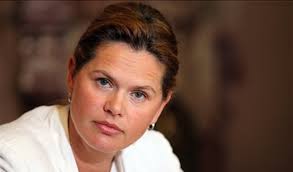 The crisis in Long-term Capital Management that began with Russian debt spread and hit every market with lightening speed. Even the dollar/yen fell from 147 to 103 in just days. Why? It is called contagion. Major investment is spread-out internationally. As a crisis unfolds for one region, it spreads by forcing liquidation of other markets to raise cash because of an unrelated market implosion.

This is what we are seeing in Slovenia where the government is discussing the impact of a possible bailout of its banks because Austrian banks in need of capital at home are forced to liquidate investments in Slovenia.

The Slovenian Prime Minister, Alenka Bratusek is confronted with the crisis in the national banking sector that is emerging as a very major problem in yet another Eurozone country. The Slovenian economy is in crisis because of Austria and the withdrawal of Austrian banks from the country is exposing what some say if about 20% of the GDP is in the category of bad loans.