The Trading Money Center New York bankers did a brilliant sales job on policymakers, central bankers, and economists that the way to stabilize the world economy was to securitize everything. This combined with what they called the “Originate and Distribute Model” would lead to the promised-land in finance.  Indeed, financial intermediation has changed dramatically over the last two decades as banks have changed the historical model of banking. The new model adapted by banks has really departed from the long-established relationship model where banks channeled funds between lenders and borrowers to build the economy. In today’s Wild West banking, an important change in the way banks provide credit to corporations has altered everything. Banks have replaced the traditional the Originate-to-Hold Model where they historically originated loans and kept them on their balance sheets until maturity. This required knowing your client and indeed was what I call Relationship Banking. Over time, however, banks began increasingly to distribute the loans they originated giving birth to a more Transactional Banking establishment known as the Originate-to-Distribute Model. With this change, banks limited the growth of their balance sheets but maintained a key role in the origination of corporate loans, and in the process contributed to the growth of nonbank financial intermediaries. Hence, everything became the Securitization Model that truly has inspired then Wild West style banking of Transactional Banking that has led to trading for profit.

The bankers have sold this panacea of a new world financial order to Washington and with this vision Glass Steagall was repealed opening the gates to financial hell. In 2003, Allan Greenspan even made the comment “Although the benefits and costs of derivatives remain the subject of spirited debate, the performance of the economy and the financial system in recent years suggests that those benefits have materially exceeded the costs.” Clearly, Greenspan became a believer and supported the repeal of Glass Steagall under Bill Clinton.

Unlike most people who preach that derivatives will blow up the world, I concede that derivatives are in fact a vital component of furthering the world economy. The question has emerged as with all things – crossing the boundary of moderation breeds chaos. Everything functions in a bell curve. Some government is necessary and can benefit society. Yet 100% government control leads to economic collapse for government cannot plan and direct an economy from a central detached position. Consequently, the manner in which the derivatives have been implemented on an ad-hoc basis absent a central clearing-house presents the greatest of all dangers – not the mere fact that derivatives exist at all since they are perhaps the oldest financial contract of all extending back to Babylonian times. However, everything cannot be transformed into a derivative absent a central clearing house for that leads to chaos and corruption no different than the broken-banknote era that resulted in the Panic of 1837.

The problem with derivatives lies in the decentralization of their market makers and as such, there is no manner in which anyone can really gauge or actually judge the true risk and rewards. Since banks create derivatives on their books and such contracts are not fungible, if the bank becomes exposed to risks it did not anticipate, they run with their hands out to government for a bailout every single time.

As we approach the start of BIG BANG (2015.75), which is 26 years from the first crack in Marxism 1989 first observed in China followed by the fall of the Berlin Wall within months, ever since the world has been drastically altered economically. The collapse of the Soviet Union in 1991 was part of this process. That was not a CIA plot, but the unraveling of the Marxist Era. We should witness dramatic political and economic changes going into 2020.05. The bottom of the ECM 2020.05 will also be 31.4 years from the start of the fall of Communism that should culminate in the final stages of the collapse of Socialism. This is part of the cause of BIG BANG that will become focused most intensely between 2015.75 and 2020.05.

What the Banks have pulled off is really highly dangerous. This entire new model of Transactional Banking  known as the Originate-to-Distribute Model is far too short-term to provide any insulation from the swings within the business cycle. As in markets at the first sign of a down-draft, the market-makers withdraw, This will dramatically increase volatility and destabilize the world economy far beyond anything we have seen since the birth of capitalism, Volatility will rise with illiquidity and that is the Petri dish for PANIC. 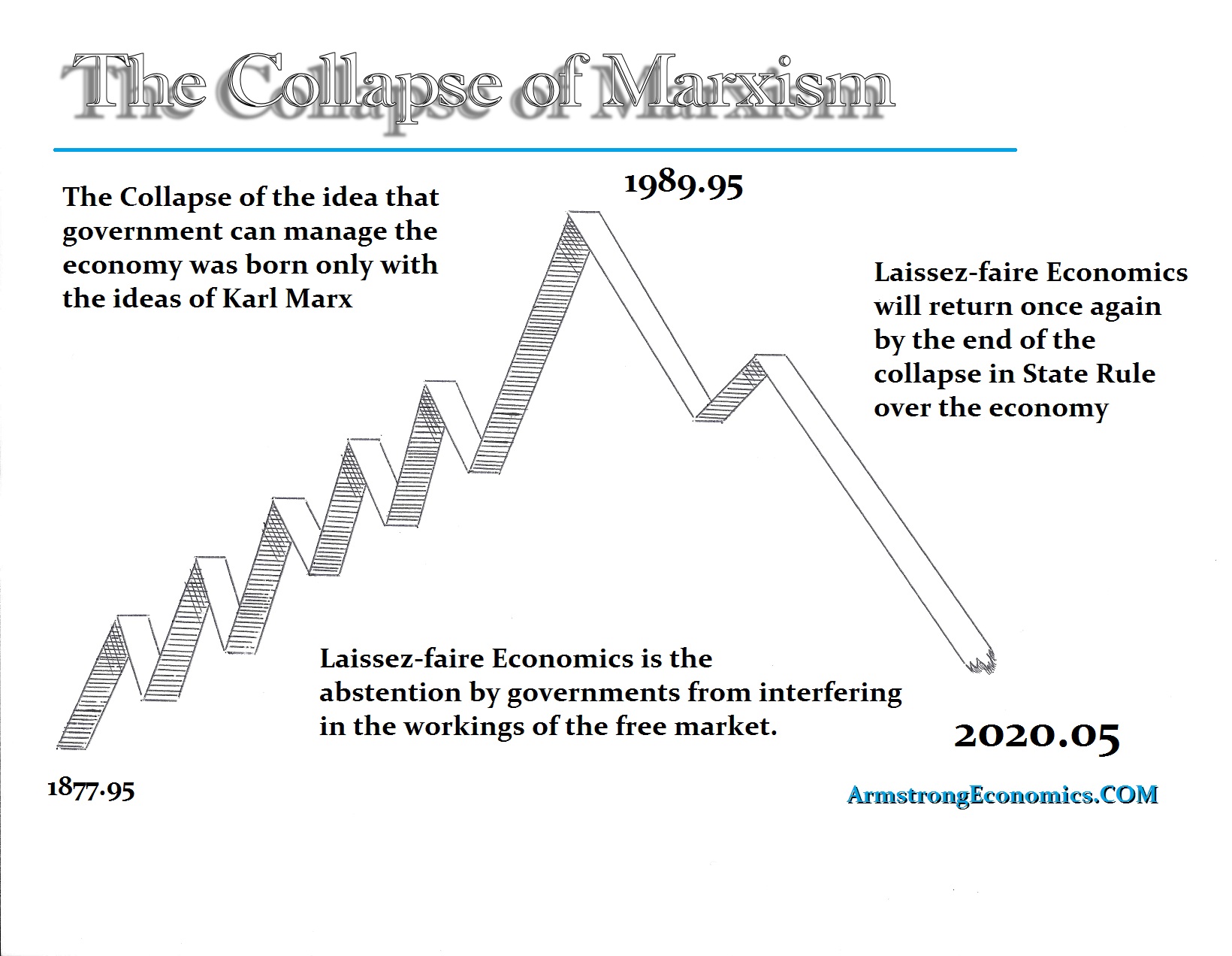 In a very important special report we will be producing on this problem, hopefully our comprehension of BIG BANG and its many facets will come into focus.