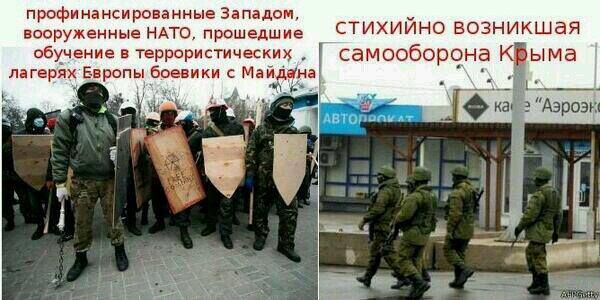 The words on this propaganda picture means are clear. On the left it states here are the dangerous revolutionaries, who are financially supported by EU and NATO and had special military training. On the right, here are spontaneous grounded groups of Self Defense with weapons.

This is how the pro-Russian press are portraying this event. The people in the West who spin these stories of how the CIA had its plot are aiding this very propaganda when they know nothing about what is actually taking place there and they are justifying the murder of innocent civilians. We do not see people with military gear, but self-made wooden shields and chains. This is not the type of gear handed out by the CIA. On the left are these Self-Defense forces of Maidan in Kiev and on the right are Russian soldiers in Crimea.

This is how war is justified