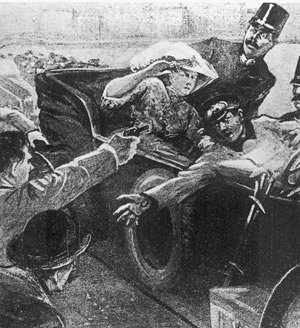 On the 28th June 1914, Archduke Franz Ferdinand of Austria, heir presumptive to the Austro-Hungarian throne, and his wife, Sophie, Duchess of Hohenberg, were shot dead in Sarajevo, by Gavrilo Princip, one of a group of six assassins. That was the spark that tore Europe apart. Olexander Turchynov in Ukrain is warning of the dangers of separatism following the ousting of President Viktor Yanukovych. He is playing right into the hands of Russia and one must question his reasoning.

Russia is insisting against ALL THE EVIDENCE that absolutely ONLY Yanukovych is entitled to rule Ukraine most likely permanently. Russia is NOT going to let Ukraine go. Every statement that comes from Moscow confirms that. Belarus and Russia are now cutting off all trade and supplies to Ukraine under the pretense that there is no legitimate government.

Quite honestly, neither Europe nor the US are prepared to confront Russia on a conventional basis and Russia is well aware of that fact. Unless Ukraine is separated, there is not much hope for the future because as long as Yanukovych is alive, Russia has the excuse that they need to eliminate the revolutionary coup and reinstate the rightful leader Yanukovych.

This is not much different from the USA painting Saddam Hussein as a tyrant who killed his own people to justify the USA invasion or the same tactic to excuse the future invasion of Syria to remove President Bashar al-Assad. It is irrelevant whether these statements were even true, partially true, or totally false. They were NECESSARY to justify action – that is all. In both cases, the USA was justifying invasion by claiming these men were criminals and any invasion was to save the people of those lands. Just replace the words with Russians and you have the same script. Saddam Hussein was certainly not responsible for 911, yet strangely after 911, the US invades not looking for Bin Laden, but Hussein. There was a totally different agenda behind the curtain going on and only a fool refuses to see what was going on used 911 as the cover justification.

Russia is now using the same political ploy out of the very same political-game book to justify whatever actions it will take to regain Ukraine. Russia’s statements are ALL easily predicted and anyone who thinks there can be a discussion or argument to prove they are wrong are barking up the wrong tree. The decision has been made when the first statement is released. It is a game of justification while preparations are made. This is simply how ALL governments respond and it is irrelevant if we are talking about Russia or the USA. There were no weapons of Mass Destruction in Iraq any more than the grass-roots movement was an illegal coup in Ukraine. Once any words are spoken, the decision is in motion.

This reminds one of Thomas Jefferson’s famous saying: I hold it that a little rebellion now and then is a good thing, and as necessary in the political world as storms in the physical.

“Societies exist under three forms sufficiently distinguishable. 1. Without government, as among our Indians. 2. Under governments wherein the will of every one has a just influence, as is the case in England in a slight degree, and in our states in a great one. 3. Under governments of force: as is the case in all other monarchies and in most of the other republics. To have an idea of the curse of existence under these last, they must be seen. It is a government of wolves over sheep. It is a problem, not clear in my mind, that the 1st. condition is not the best. But I believe it to be inconsistent with any great degree of population. The second state has a great deal of good in it. The mass of mankind under that enjoys a precious degree of liberty and happiness. It has it’s evils too: the principal of which is the turbulence to which it is subject. But weigh this against the oppressions of monarchy, and it becomes nothing. Malo periculosam, libertatem quam quietam servitutem. Even this evil is productive of good. It prevents the degeneracy of government, and nourishes a general attention to the public affairs. I hold it that a little rebellion now and then is a good thing, and as necessary in the political world as storms in the physical. Unsuccesful rebellions indeed generally establish the incroachments on the rights of the people which have produced them. An observation of this truth should render honest republican governors so mild in their punishment of rebellions, as not to discourage them too much. It is a medecine necessary for the sound health of government.”

« Taxing the Rich – Wait A Minute – Its You?
YanukovychLeaks & Russia moves in to protect Crimea »