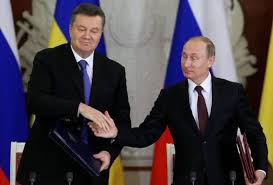 Ukrainian Prime Minister Mykola Azarov resigned on Tuesday. This much is true. Part of the compromise was to appoint a “member” from the opposition as Prime Minister. That is really a powerless position for the real power lies with the  President Viktor Yanukovich. The former boxer-turned-politician Vitaly Klitschko and others have shied away from taking the position for it will be purely symbolic.

The protesters drove to Yanukovich’s residence and the very next day is when all these crazy laws were passed. This included a 2 year imprisonment if more than 5 cars traveled together. Yanukovich will simply not leave office. That is the bottom line. The symbolic steps to try to pretend he is yielding to the protesters are transparent. What he is hoping is that the movement will evaporate like the Occupy Wall Street movement.

The general undertone is that he and his gang are in power and they really take orders now from Russia. It was not as simple as buying gas from Europe who in turns buys its gas from Russia. There was a penalty applicable to Ukraine and they had to pay for the gas if they did not take it.

There is little chance of Ukraine actually emerging as any free type of society. The protesters have displayed signs that read bluntly – they will not follow laws enacted by criminals. There have been interruptions to the internet in Ukraine, but the government has realized that should they cut it off entirely as Obama has the power to do, that may cause the protest to explode with others joining in who are content to just watch what is going on. Others had signs in their cars – do not follow me; I am the fifth car. The distinction here is that the youth are unemployed. People will not protest if they are fat and happy. That is why Occupy Wall Street fell apart. You need real economic pain before anything will really happen. So when dealing with people who are unemployed, the game changes because they have no ability to get fat and happy.